Will Cultured Meat Soon Be A Common Sight In Supermarkets Across The Globe? 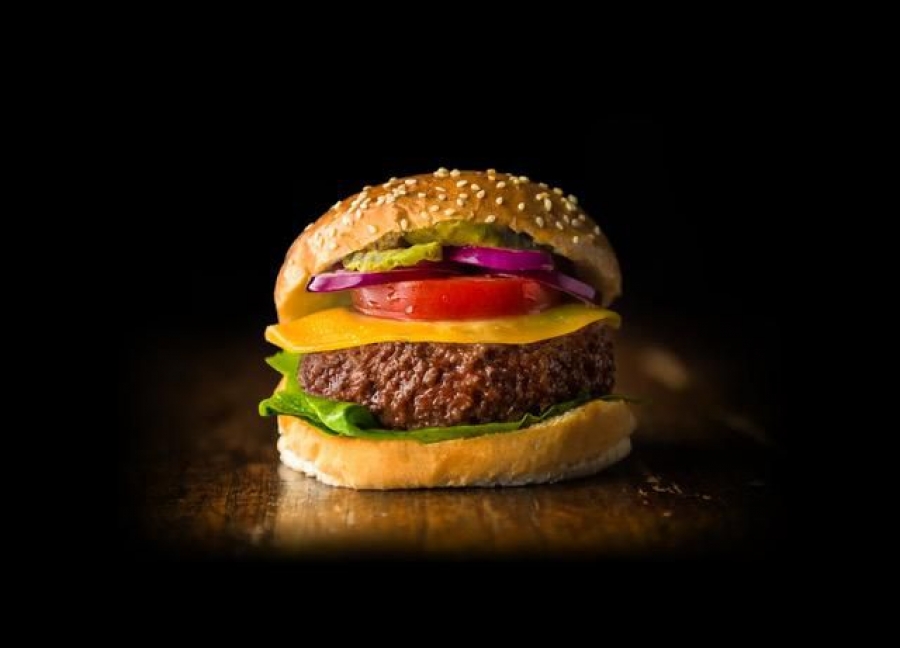 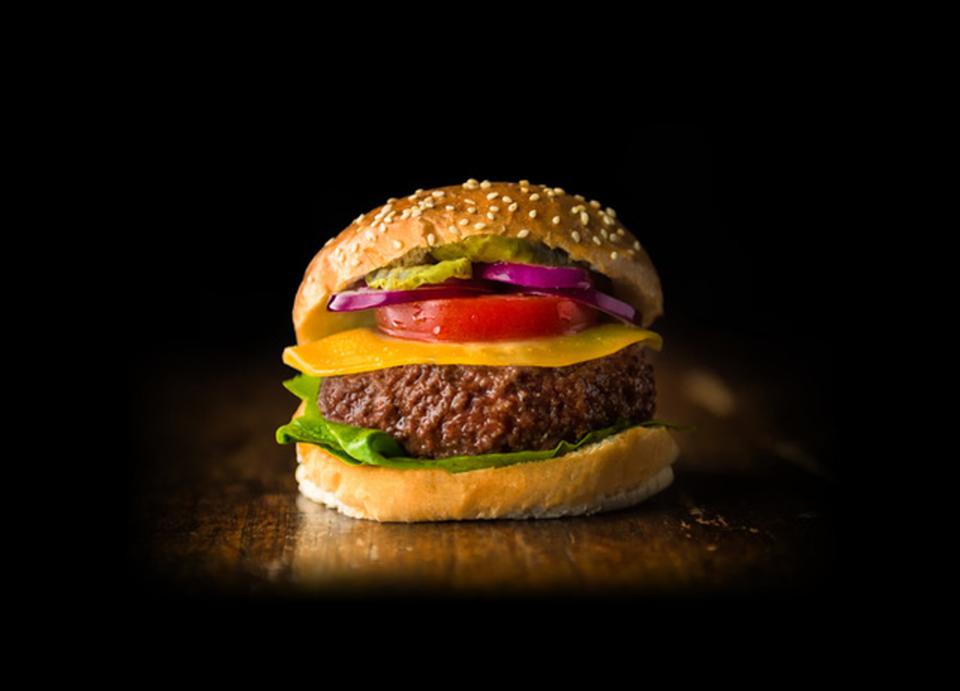 A hamburger made out of cell-based meat by Mosa Meat, one of many companies throughout the world … [+] creating beef and other animal products without the animal.

Up until now, plant-based food companies like Beyond Meat, Impossible Foods, and Quorn have almost singlehandedly worked to lessen the impacts of industrial animal agriculture.

Supermarket shelves and fast food restaurants across the US are serving up vegan burgers and meatballs and plant-based chicken nuggets are showing consumers there is an alternative to relying on animal-based protein.

But a quiet revolution is also taking place in labs, where scientists are working to cultivate meat and seafood grown from cells, with the potential to reduce demand for industrial animal agriculture even further.

Here’s how the process works: Stem cells are taken from the muscle of an animal, usually with a small biopsy under anesthesia, then they’re put with nutrients, salts, pH buffers, and growth factor and left to multiply. Finessing the technology and getting the cost to an affordable level is happening at a slower pace than the plant-based industry, but a number of start-ups are nevertheless aiming to get their products on the market soon. 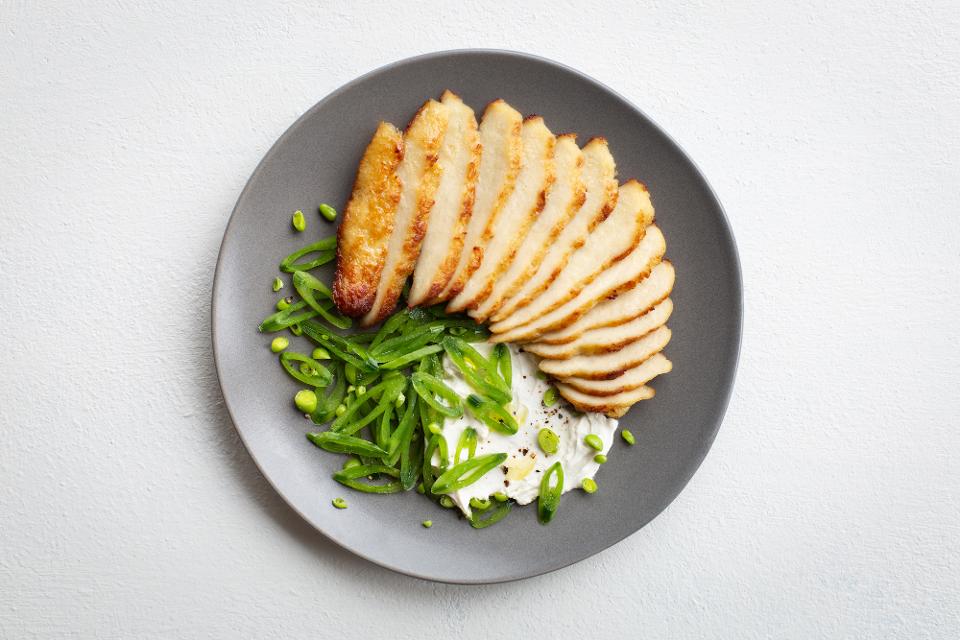 Cell-based meat (also known as cultured, cultivated, slaughter-free, cell-cultured, and clean meat) could be a common sight in supermarkets across the west in the next three years, according to the Institute of the Future in Palo Alto. California-based Memphis Meats made headlines for its world-first cell-based meatballs four years ago, and is currently building a pilot plant to produce its cultured beef, chicken, and duck on a bigger scale – with plans to launch more plants around the world.

And it isn’t the only cell-based meat start-up in the The Golden State. There’s the recently formed San Francisco-based Artemys Foods, co-founded by biochemist Jess Krieger, who has spent the past six years working at Kent State University in Ohio growing cell-based meat in a lab, Berkeley-based Mission Barns, focused on creating animal fat, which it has mixed with other ingredients to make duck sausages, and San Diego-based BlueNalu, a startup developing seafood from fish cells through a process called “cellular aquaculture.” 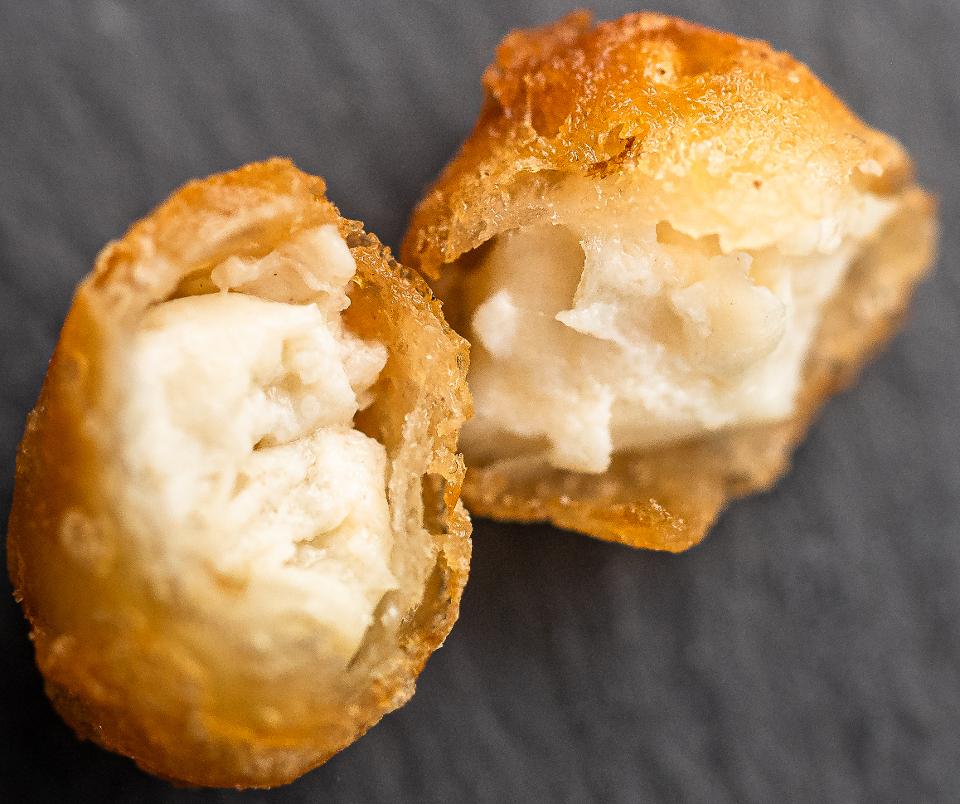 Close up of BlueNalu’s whole-muscle, cell-based yellowtail, beer-battered and deep-fried for fish … [+] tacos.

But innovation isn’t limited to the US – it’s happening across the world. The global cell-based meat market is predicted to be worth $15.5m by 2021 and $20m by 2027, according to analysis. One report estimates that 35% of all meat will be cultured by 2040.

While estimates vary, one study found that cell-based beef is projected to use 95 per cent fewer global greenhouse gas emissions, 98 per cent less land use and up to half as much energy. It also significantly reduces the amount of antibiotics needed, which are widely used in agriculture and contribute hugely to worsening antibiotic resistance. And since the animal cells are extracted humanely and grown in a facility rather than within the animals themselves, cell-based meat has the potential to all but eliminate animal suffering.

The industry has made huge progress since the first cell-based hamburger was unveiled in 2013 in London by Dutch stem cell researcher Mark Post, chief scientific officer at Dutch company Mosa Meat. While this was a huge achievement, it also showed the world how far the industry had to go before commercially viable cell-based meat could be a reality. It cost $325,000 to make, and wasn’t totally animal-free, as most of the burger’s muscle strands were grown with fetal bovine serum, which comes from blood drawn from bovine fetuses.

In the intervening years, Mosa Meat has made several breakthroughs, and aims to bring the price down to a commercial price. It now doesn’t require fetal bovine serum, and has developed a process that allows industrial scale production. 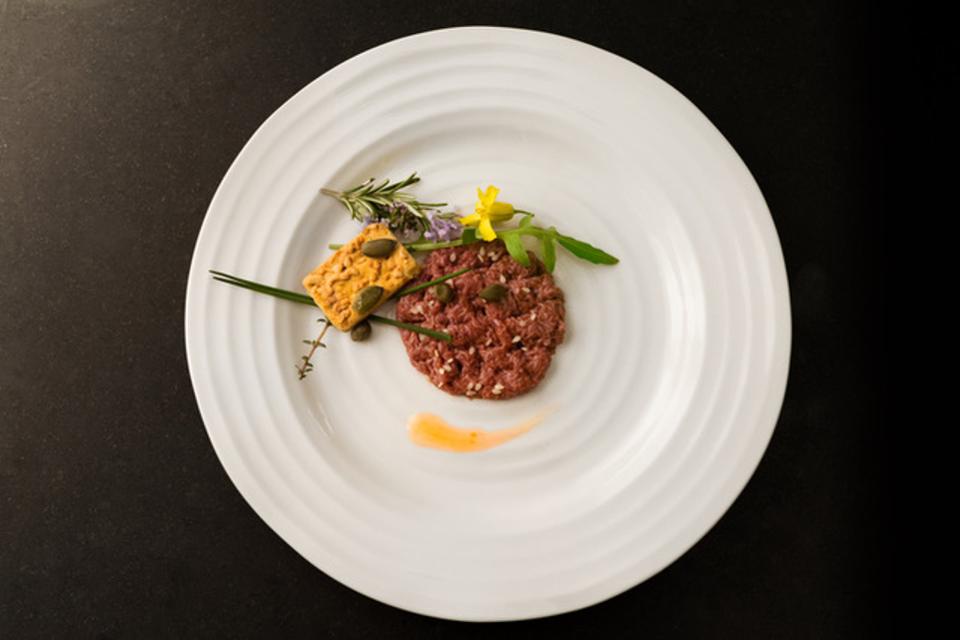 Also in the Netherlands, start-up Meatable has recently raised €9m to help reduce costs and scale-up production of its beef and pork. It aims to have an industry-scale plant by 2025, and will have a small-scale bioreactor – the machine where cell-growth takes place – this year. Meatable’s cofounder Krijn de Nood hopes to unveil its first prototype this summer.

Elsewhere in Europe, the UK’s Higher Steaks is growing stem cells for the production of mince for pork sausages. Instead of using fetal bovine serum, the company uses protocols exclusively licensed to it by its collaborators, the University of Minnesota, that allow it to reprogram stem cells into muscle and fat tissues.

And Spain’s Cubiq Foods is producing cell-based fat, which is used to enhance the flavor of food and enrich it with essential fatty acids, such as omega-3.

But when it comes to cell-based meat, all eyes are on Israel, where a number of start-ups like Future Meat Technologies and SuperMeat are making huge progress. The country’s interest in cell-based meat has also been attributed to its thriving vegan culture. 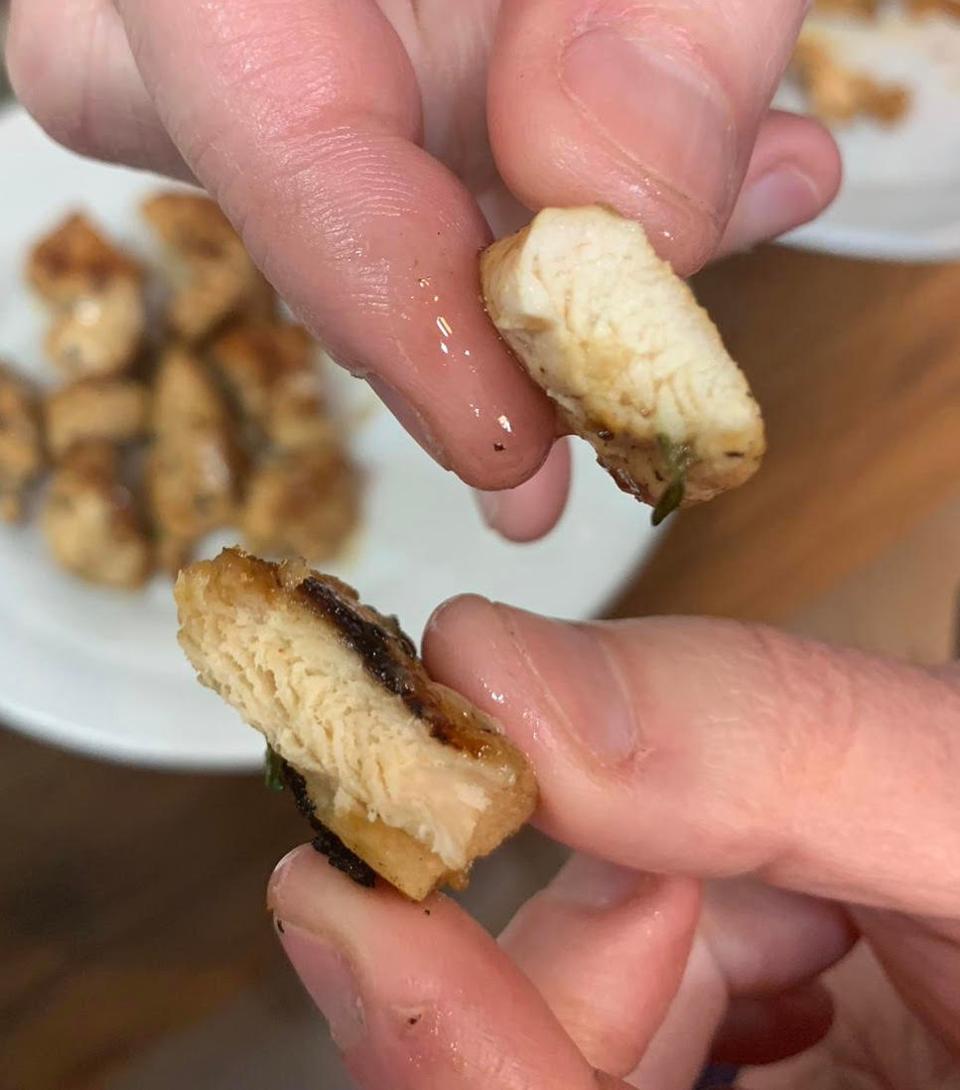 Future Meat Technologies, founded in 2018, has shortened the manufacturing process to two weeks, with a patent-pending method they say allows for higher production yields of cell-based beef. The start-up’s technologies enable producers, farmers and retailers to manufacture biomass and process it locally. The company hopes to get cost down to $10 per pound by 2022.

As for SuperMeat, it is developing cell-based meat from chicken cells (it claimed during its launch in 2016 that it was the first company to work on clean chicken products for mass production). One of Europe’s largest poultry producers, PHW-Gruppe formed a partnership with SuperMeat in 2018. “We believe 2020 will be the tipping point for the cultivated meat industry, once the proof of scale will be introduced to the world,” says Shir Friedman, Co-Founder and Chief Communications Officer of the company. “SuperMeat is excited to take a lead part in this historical event.» 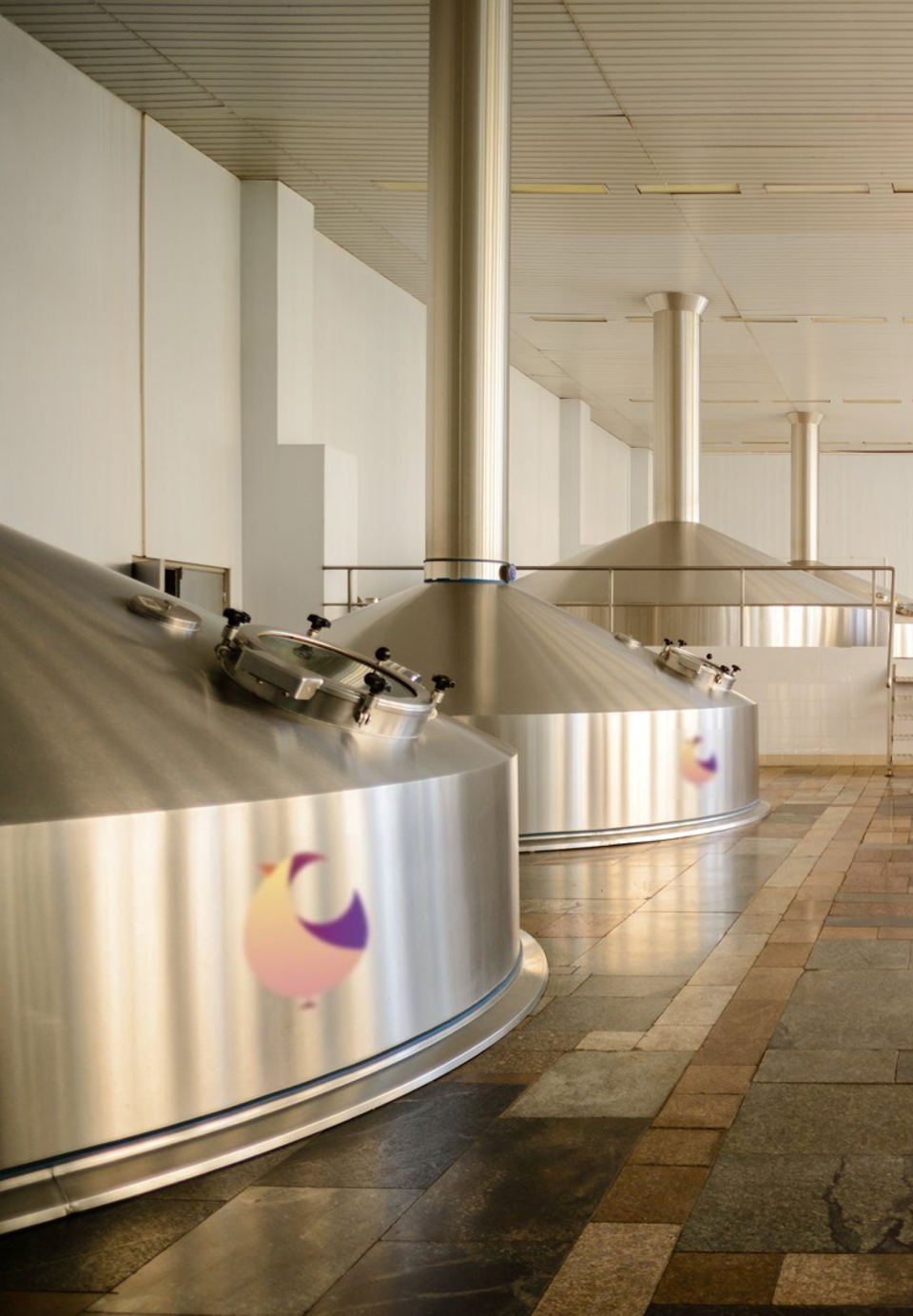 An illustration of SuperMeat’s cell-based meat cultivators of the future.

Another Israeli start-up, Aleph Farms, created the world’s first cell-based steak at the end of 2018. It was co-founded only one year prior together with The Kitchen Hub from the Strauss Group, and with Professor Shulamit Levenberg of the Technion Institute of Technology. And in fall of 2019, Aleph Farms successfully “3D printed” meat on the International Space Station. “Our experiment of bioprinting meat in space… consisted of printing a small-scale muscle tissue using 3D Bioprinting Solutions’ bioprinting technology,” says Yoav Reisler, External Relations Manager for the company. “The proof of concept sought to assess the potential of producing cultivated meat in a zero-gravity environment away from land and local water resources. Our approach for cultivating beef steaks is imperative to the experiment, as it relies on mirroring the natural process of tissue regeneration that happens in a cow’s body but under controlled and animal-free conditions. Our overarching goal is to produce meat products that have a significantly reduced ecological impact and this was a milestone in towards achieving that.” Earlier this month, Aleph Farms announced plans to open an educational complex next to its production facility to provide the general public a more in-depth view of how cell-based meat is grown. 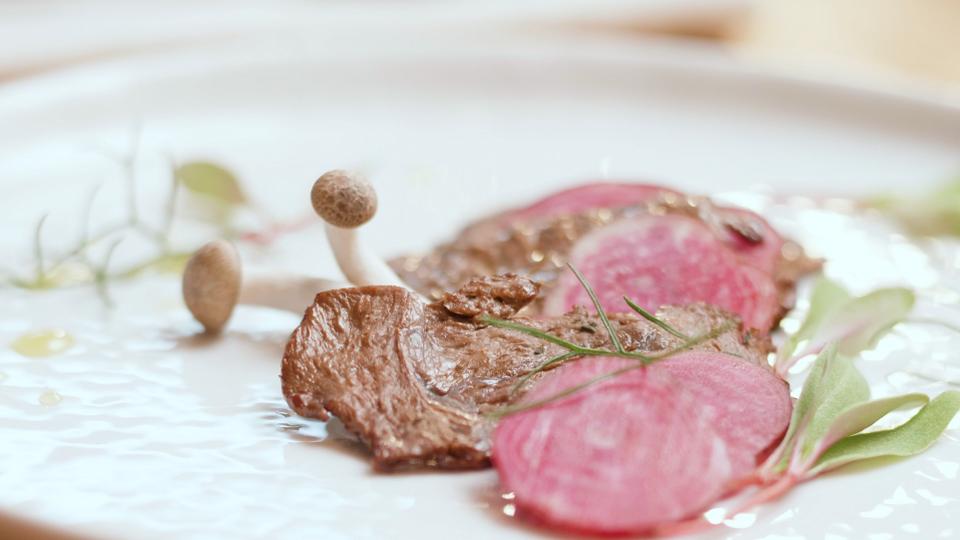 Also in Israel, BioFood Systems aims to produce beef products using bovine embryonic stem cells. It also hopes to scale up technology that it can license globally to enable meat manufacturers to produce their own cell-based meat.

But other parts of the world aren’t far behind Israel, including Asia. Singaporean Shiok Meats is working on bringing cell-based based crustaceans (shrimp, crab and lobster) to market, and says it’s the first company of its kind in Singapore and South-East Asia. It hopes to have a commercially viable product in the next few years, and is currently researching and developing. 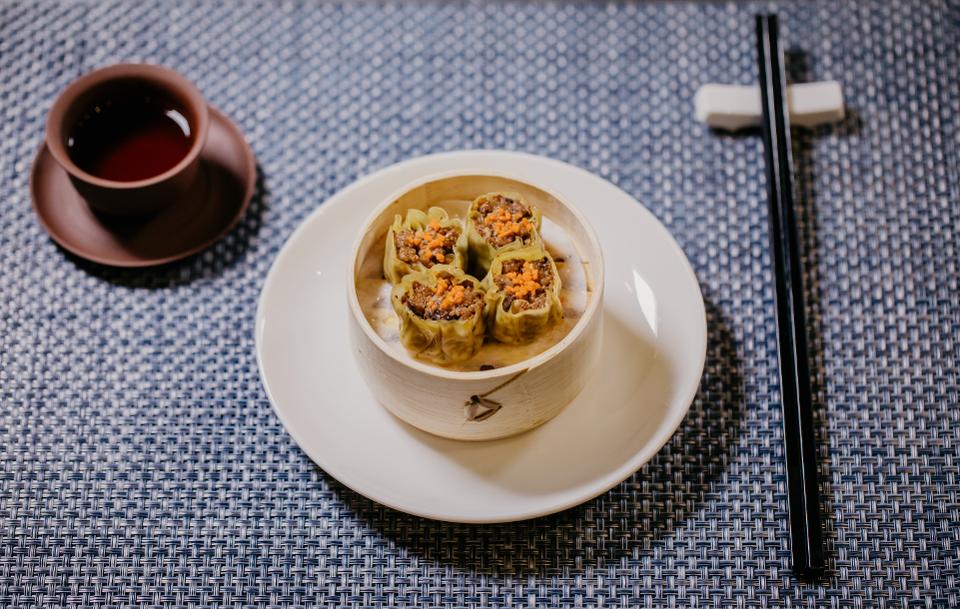 And in Japan, meat producer Toriyama and its export agent, Awano Food Group has partnered with JUST to grow, distribute and sell its cell-based wagyu beef worldwide. 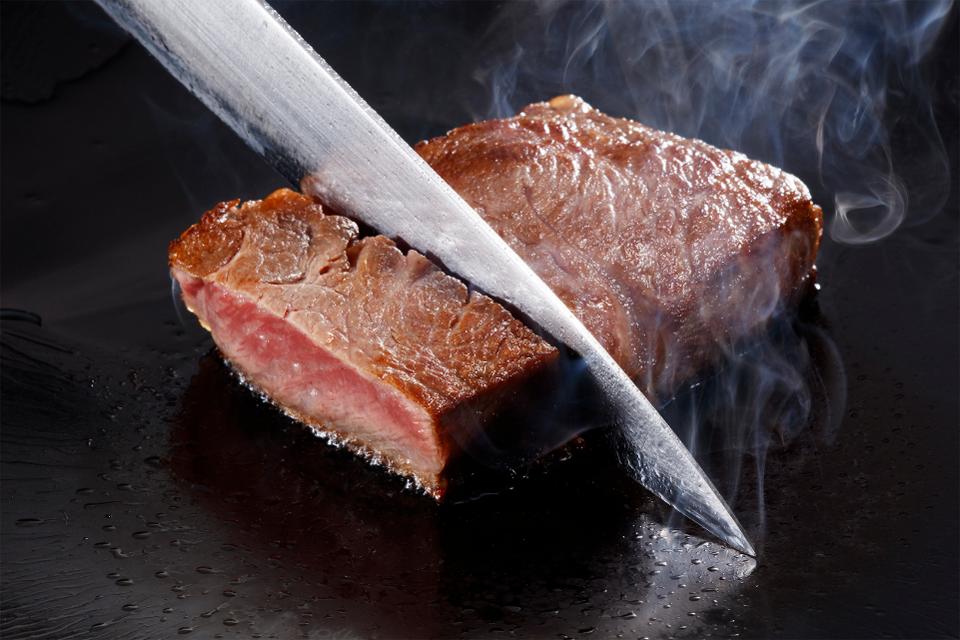 JUST doesn’t yet have images of its cell-based wagyu because it’s still in early stage R&D, but it … [+] may one day look like this animal-based piece of Wagyu beef steak seen here.

In-between Asia and Europe, innovation is also happing in Turkey. Biftek is the first and still the only company developing cultured meat in the country. It uses a plant-based formulation, made up of 44 proteins, in place of fetal bovine serum. Founder Can Akcali said in a recent interview that the media in Turkey is showing a growing interest in its work, and cell-based meat more widely.

Since the first cell-based unveiling of a cell-based burger in 2013, scientists have been flocking to labs in a race to iron out numerous teething problems and be the first to make a commercially viable cell-based meat product. Meanwhile, private investment into the industry has soared. Last year, twelve companies raised $50 million in 14 deals – double the amount of 2018. US-based Memphis Meats raised $22 million, Spain’s Cubiq Foods raised $14 million and Mosa Meat drew in $9 million.

Memphis Meats now plans to build a pilot production facility, thanks to additional investments in January this year from Cargill and Tyson Foods, as well as high-profile investors Bill Gates, Richard Branson, and Kimbal Musk.

Ido Savir, SuperMeat’s chief executive, said Mosa Meat introduced the concept of cell-based meat to the world, and that the main challenge start-ups are still facing is proof of scaling up production to a commercially viable size that’s cost-efficient. Once these hurdles are overcome, it will be a much smoother process to get cell-based meat on shelves. At the moment, cell-based products are being prototyped in labs – but once scientists have finessed the process and the cost, they’re produced at scale and can grow in facilities like any other food.

Many cell-based start-ups expect to get their products to market in the next few years. Whether or not they are actually able to meet that projection is an open question. “I worry most startups in the cultured meat space are overestimating their short-term timeline to get to market and underestimating their potential long-term impact on completely redesigning our food system from the cell-level up,” says Max Elder, Research Director in the Food Futures Lab at Institute for the Future. “Regardless of the timeline, one thing is clear: we desperately need to undo the damage industrialized animal agriculture is wreaking on our communities, animals, and the planet.” While it may indeed be unwise to count our cultured chickens before they hatch, especially in light of the urgent challenges we are facing, we can no doubt expect more innovation in the coming years. Perhaps one day – even if not in the near future – all the meat on our plates will indeed be slaughter-free.