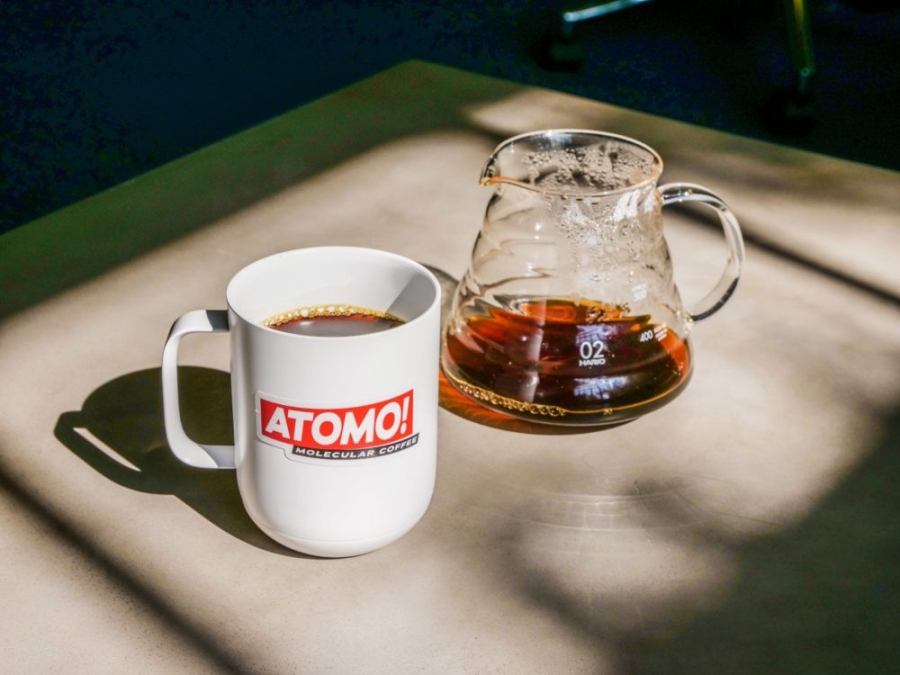 Many of the latest moonshots in foodtech involve a simple formula: ‘x without y.’ Eggs without chickens. Milk without cows. Collagen without pigs. Whisky without barrels.

So, how about coffee without the bean?

That’s what’s brewing at Seattle’s Atomo Coffee, which has just closed a $9 million seed round to bring its upcycled molecular coffee to market.

These investors all converged around ideas of market size, sustainability problems with conventional coffee production, and the fact they had found Atomo’s cold brew samples rather tasty.

“Coffee is among the most consumed beverages worldwide,” said Tony Lau of Horizons Ventures, who is also a board member of Atomo. He cited figures showing that the world gets through 42.6 liters of java per person, per year.

Atomo, Lau added, “can make a huge impact in the market from a sustainability aspect while not sacrificing the quality and taste that consumers are going after.”

Chuck Templeton, managing director of S2G Ventures, also underscored why a sustainability impact on the coffee trade was timely. “Today, coffee production has the sixth-highest climate impact in terms of greenhouse gas emissions per kilogram of food product on the planet,” he said.

These sustainability concerns over the world’s caffeine fix extend beyond carbon emissions. Scientists at London’s Kew Royal Botanic Gardens argue that as many as 75 of the 124 coffee species the world consumes are facing extinction if deforestation and climate change continue their current trends. Alarmingly, among the most susceptible species is Arabica, which accounts for 60% of the global coffee supply.

While Tess Hatch of Bessemer Ventures also hailed Atomo’s “profoundly important mission” over similar sets of environmental concerns, she got right to the nub of what would propel adoption of molecular coffee besides eco-worry: you can tailor it to have “no bitterness and better taste.”

For AgFunder’s Rob Leclerc, Atomo is a harbinger of radical change for the coffee trade, not unlike what the advent of plant-based protein trailblazers like Impossible Foods or Beyond Meat were for meat producers. “With Americans drinking 450 million cups a day, coffee is bigger than beef – and we have already seen what the alternative meat industry has done for the food revolution,” he said. “This is only the beginning for disruptive innovation in the coffee industry.”

Atomo claims that its proprietary technology replicates the characteristics of the coffee bean to a far higher degree of accuracy than existing replacements made from things like mushrooms, acorns, and peanuts.

Historically, the tech owes a debt to decades-long research undertaken at the Technical University of Munich, which evaluated the importance of specific compounds in delivering coffee’s unique taste. These findings allowed Atomo to make some breakthroughs of its own, with the firm teaming up with a team from Zurich University of Applied Sciences to reverse-engineer dozens of compounds that make up the taste of a ‘perfect’ coffee. They did this by introducing specific combinations of amino acids and sugars into the substrate of roots and seeds from various plants, and then driving molecular reactions through toasting and roasting.

There is a food waste play here, with the team prioritizing this reverse-engineering of coffee’s aroma, flavor, color, caffeine content, and mouthfeel using ‘upcycled’ ingredients. For those not keeping tabs on this trend, the Upcycled Food Association defines it as “foods using ingredients that otherwise would not have gone to human consumption, are procured and produced using verifiable supply chains, and have a positive impact on the environment.”

It is all a long march from the company’s launch just last year. It was founded by CEO Andy Kleitsch and chief technology officer Jarret Stopforth, who met over a disappointing coffee and then set up a Kickstarter campaign that by February saw 693 backers pledge $25,331 for a $10,000 goal.

“There’s got to be a way I can hack this,” recalled Stopforth — a former product developer at food and beverage companies such as Soylent, Chobani, Campbell’s, and Kettle & Fire.

Discussing their journey with AFN, the pair say their team is setting its sights on building its own production roastery – located in SoDo, the Seattle neighborhood just down the road from the headquarters of local coffee behemoth Starbucks.

“Seattle is the perfect confluence of tech and craft coffee, it only makes sense that coffee is reinvented here,” said Kleitsch. The facility, he added, will be built from scratch, as the molecular coffee production process is too far removed from that at existing roasteries.

With some shipping of their early samples disrupted by Covid-19 transit restrictions, the duo say they are guarding their existing stocks “like gold,” but still anticipate launching their first molecular coffee products into the market in 2021.

Will regulators allow it to be labeled as ‘coffee’?

“I ask: what is coffee to you? Coffee has a flavor and aroma that has originated from a bean. But it doesn’t have to.”