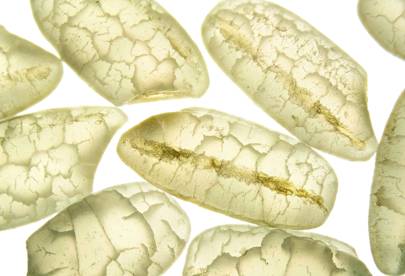 In December 2015, as representatives from United Nations member states were finalising what would become the Paris Agreement on climate change, Duncan Cameron stood before a crowd of delegates and warned them about an environmental catastrophe happening right beneath their feet.

A soil biologist and co-director of the University of Sheffield’s Institute for Sustainable Food, Cameron had long known that the amount of farmland capable of growing nutrient-rich crops was shrinking, but he didn’t know how fast. For the previous year, Cameron’s team had analysed the scattershot data available on arable land loss, and what they found was disturbing: in the past four decades, the world lost up to one-third of its arable land to soil degradation and resulting erosion. Without alternatives, already fragile agricultural systems are on the verge of collapse, raising the prospect of a world filled with farms that can’t grow enough food.

“It’s quite a terrifying amount,” Cameron says. “We hear that we can solve a lot of these problems in terms of food insecurity by wasting less and getting more efficient, but that isn’t going to give us everything we need.” Now, an emerging group of startups and researchers are convinced that answers to the impending food crisis may not lie on land at all – instead they’re looking to the ocean and to feed future populations with crops grown on floating farms and fed by seawater.

These ambitious initiatives target a thorny mess of environmental and humanitarian issues — freshwater and land scarcity, global hunger, crop security, and agriculture’s enormous carbon footprint amongst others — but the scientific and logistical challenges they face are enormous. In a field where there are few easy answers, one problem looms above all others: what do we do about all the salt?

Soil scientists and farmers have waged war against salt for decades. As sea levels rise, salt levels are creeping up in the rivers and underground aquifers that irrigate fields – particularly those low-lying areas close to vast river deltas. Across the world, farmland is drying out which raises salt levels and interferes with nutrient uptake and damages tissues. Excessive salt causes massive global crop loss — an estimated £21.7 billion each year — and that’s expected to increase as factors like sea level rise and higher-intensity weather events driven by climate change push ocean water further into farmland, hitting the poorest coastal communities hardest.

Once there, salt requires significant resources to remove from soil — the most common methods involve large amounts of freshwater, which is already scarce for an estimated four billion people worldwide — sending researchers on a long-running race to find staple crops that can grow despite constantly increasing salinity. Several countries including China, India, the Netherlands, and the United Arab Emirates have developed crop varieties that can withstand some soil salinity, but the real white whale is a staple crop that can thrive regardless of how much seawater is thrown at it.

“In principle, it could be done, but it’s complicated,” says Exequiel Ezcurra, a plant ecologist at the University of California, Riverside who studies desert and ocean ecosystems. Ezcurra says that creating seawater-tolerant crops would require at least one, and possibly both, of the basic biological mechanisms plants like black mangroves have adapted to survive in salty waters. One mechanism is freshwater filtration in the roots, which for staple crops would require fundamentally altering the root’s dermal tissue to keep salt out. The other is specialised glands in the leaves that excrete salt as the plant pumps seawater throughout its system.

Changing a staple crop to have either mechanism is a challenge so big, many researchers aim for far more modest gains in salt tolerance and aren’t yet gunning for crops that grow in straight seawater. Plant breeders have been working on salt-resistant crops for decades but in rice – a crop notoriously sensitive to salinity – even the most salt-resistant varieties can’t cope with anything like the saltiness of seawater. “I’m not saying that nobody will be able to do it. Probably somebody will at some point,” Ezcurra says. “I simply have never seen a patent or anybody being able to do that” now.

Luke Young and Rory Hornby filed for a provisional patent in February for a technology they believe will break the seawater tolerance barrier. Young and Hornby are the cofounders of Agrisea, a Canadian startup that’s working to develop gene-edited salt-tolerant crops with the goal of soon growing them in floating farms placed in sea-flooded plains or anchored directly in the ocean.

Agrisea’s proposed method involves first isolating stem cells from crops like rice, then using CRISPR gene editing technology to insert a DNA sequence specialised to the plant. The sequence targets one of eight different genes, each chosen because the only place in nature where all eight are “switched on” is in plants that have naturally adapted saltwater tolerance. The sequence alters how the gene expresses, then stem cells are grown into a full plant that produces its own seeds armed with the newly edited gene. Follow the same process for editing the remaining seven genes, and the Agrisea team says you’ll have a plant that can grow in the salty sea without fertiliser, freshwater, or pesticides.

Many researchers have edited single genes for salt tolerance, but editing a gene network is an approach Young and Hornby say are unique to Agrisea. But they’re not at the finish line yet.
Thus far, Young and Hornby are working to grow rice plants in water one-third the salinity of seawater and plan to have small farms floating off the shores of Kenya and Grand Bahama Island by the end of the year. Young says that he’s confident the process will work because similar strategies have been used in the past to gene edit plants for other traits and “because I’m not proving something, I’m copying something. I’m copying what nature has already been able to do.”

Julia Bailey-Serres, director of the Center for Plant Cell Biology at the University of California, Riverside, studies crop resilience and the molecular physiology of rice. She says that researchers routinely edit plants to knock out a gene’s function, but editing in a way that changes specific amino acids, which likely would be required for growing crops in the ocean, has only been done by a few researchers worldwide and not yet for the purposes of salt tolerance. That more granular type of editing will become more feasible in the future, she says, ”but I don’t know if that’s going to be in two years or 10 years.”

Bailey-Serres adds that she would be excited to see Agrisea succeed and that any tolerance increases beyond one-third ocean salinity would be a huge win in places like Vietnam and Bangladesh where rice paddies are bombarded with seawater.

Agrisea’s approach to arable land scarcity relies on cracking the salt tolerance problem, but other teams are opting to sidestep the issue entirely. Floating farms that reduce demand for arable land have long been key to survival in many non-Western nations. These crops thrive in freshwater bodies — like Myanmar’s Inle Lake, which locals have relied on for food possibly since as early as the nineteenth century — in buoyant beds that bob along the surface as monsoons and floods sweep through. Floating farms have also gained interest in Western cities. Over the last few years, research groups and architectural firms in the UK, Spain, and Italy amongst others have produced designs for floating vertical farms and greenhouses that suck up seawater from the outside and desalinate it to nourish hydroponic crops grown inside.

These projects push crops out into the ocean, but Yanik Nyberg’s strategy is to bring the ocean in. Instead of making new space for crops offshore, Nyberg’s Scotland-based company Seawater Solutions takes degraded coastal farmland, seeds it with naturally salt-tolerant herbs like samphire and sea blite, then floods the area by removing seawalls or pumping in water from the ocean to create an artificial salt marsh. In this new wetland ecosystem, crops grow without fertilisers, pesticides, or freshwater. They also hold soil in place, preventing erosion, and feed on nitrates and carbon, both of which over-accumulate in waters near human populations due to factors like agricultural runoff and CO2 emissions. A solar-powered irrigation system recycles the remediated water back to its original source.

Seawater Solutions currently operates six marsh farms in Scotland and a handful of developing countries, including a nascent initiative to create a marsh farm in the middle of a desert in Malawi by tapping underground saltwater aquifers. These projects are small – most around 10,000 square meters — and are limited to global food markets that are much tinier than those for staple crops.

Duncan Cameron says that there isn’t one right answer. Since the 2015 Paris climate talks, Cameron’s team has attacked arable land loss from a multitude of angles, including monitoring nutrients in soil, forecasting the agricultural impact of urban green spaces, and building a hydroponic greenhouse in Oman that relies on desalinated water pumped in from the ocean. Solving arable land scarcity will require novel approaches all focused around giving the world’s tired soil a much-needed break. “We’ve got to take pressure off it somehow,” he says.

Google got rich from your data. DuckDuckGo is fighting back

Inside the ‘bullshit’ get-rich-quick world of dropshipping

The secret behind the success of Apple’s AirPods