The Meatless Mafia: Four Companies Revolutionizing The Future Of Food 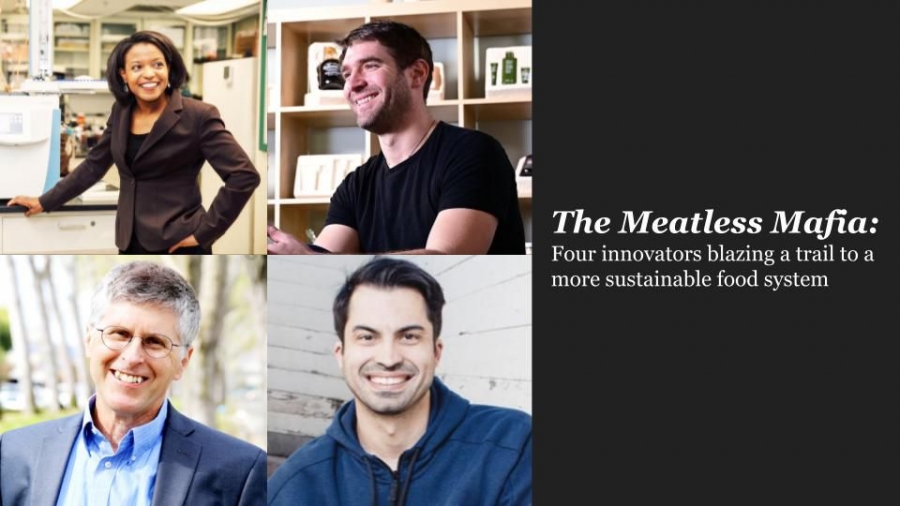 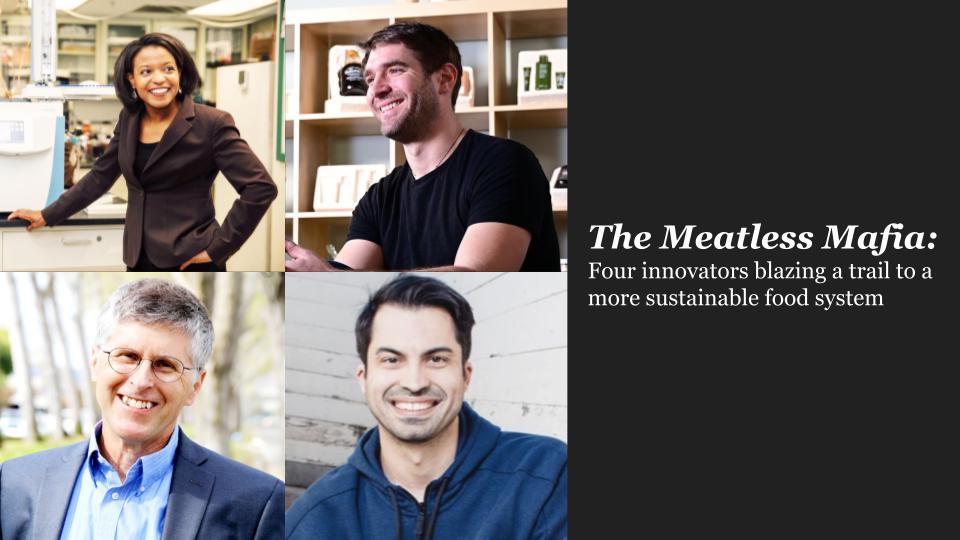 The world is waking up to the fact that our current meat consumption is unsustainable. Raising livestock not only requires vast quantities of water and land but it’s also a huge contributor to climate change, producing more greenhouse gases than driving cars. That’s because beef cattle produce 70% of the world’s emissions of methane, a potent greenhouse gas 86 times worse than carbon dioxide. Some experts report that the global consumption of red meat needs to fall by 90% to prevent a global climate catastrophe. 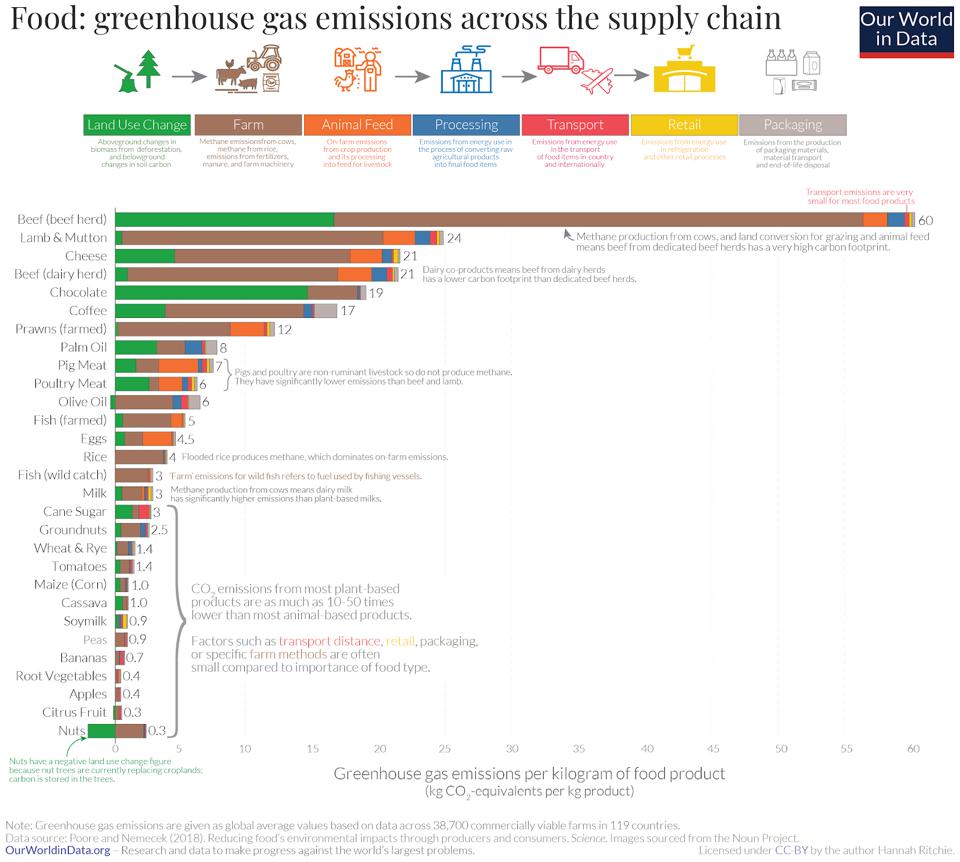 When it comes to our food choices, beef is by far the biggest contributor to greenhouse gas … [+] emissions. Source: Our World in Data.

Our World In Data

Thankfully, more and more of us are finding sustainable alternatives to animal protein. But many meat lovers find it hard to replace a juicy, perfectly cooked steak with tofu or falafel – it just isn’t the same. If you’re struggling with this yourself, take heart: the alternative protein industry is serving up some tasty options that may change the way we think about meatless meat.

What is alternative protein?

Alternative proteins is a general term that covers both plant-based and food-technology alternatives to conventional meat production. It’s a booming industry – in the first quarter of 2020, alternative proteins saw $930 million in investments globally, outstripping the $824 million raised over the entire previous year. Most of this investment is being made in the U.S., where companies are popping up to develop sustainable protein for environmentally-conscious foodies without depending on livestock. Celebrity investors like Bill Gates, Katy Perry, and Serena Williams are jumping on the bandwagon.

Here are four innovators who are taking on the conventional meat industry. Together, they are members of this Meatless Mafia, blazing a trail to a more sustainable food system.

To call them a “mafia” is a little misleading, because they are the four of the nicest and most thoughtful people you will ever meet. But they also won’t mince words about who the real enemy is. Patrick Brown, CEO of Impossible Foods and a man known for speaking his mind, says bluntly, “The only competition we care about is the beef industry. Anyone else who’s making a product that can compete against animal meat is an ally.” Together, these meatless meat pioneers are setting the standards for a new food future. 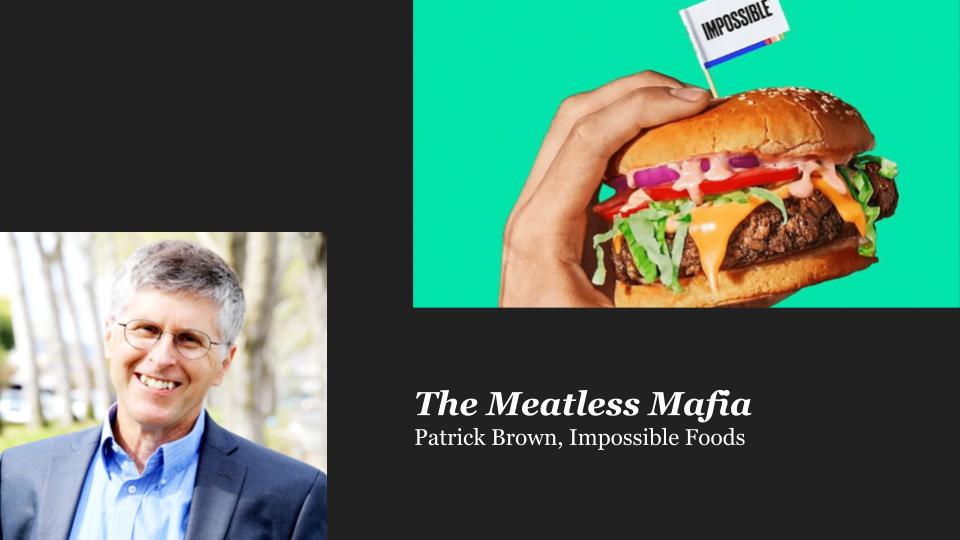 Impossible Foods is one of the biggest players in today’s plant-based food sector. The California-based company got its start in 2009, when Stanford University professor Patrick O. Brown decided to change the focus of his career and address the unsustainable food system in an effort to fight climate change. In 2016, the company launched its famous Impossible Burger, which stunned meat-eaters and vegetarians alike with how closely it looked, smelled, and tasted just like beef. (The Impossible Burger 2.0, launched in 2019, was so realistic that it turned one vegetarian reviewer’s stomach.) Impossible Foods achieves its meaty taste and texture with its patented addition of the heme molecule, an essential compound found in every living thing. Using genetically engineered yeast with DNA from soy plants, the company is able to ferment the heme molecule in a lab, rather than extracting it from soybean roots. With a total investment of $1.2 billion today, Impossible Foods isn’t just making burgers but also an expansive plant-based lineup of other meats, dairy, and fish. 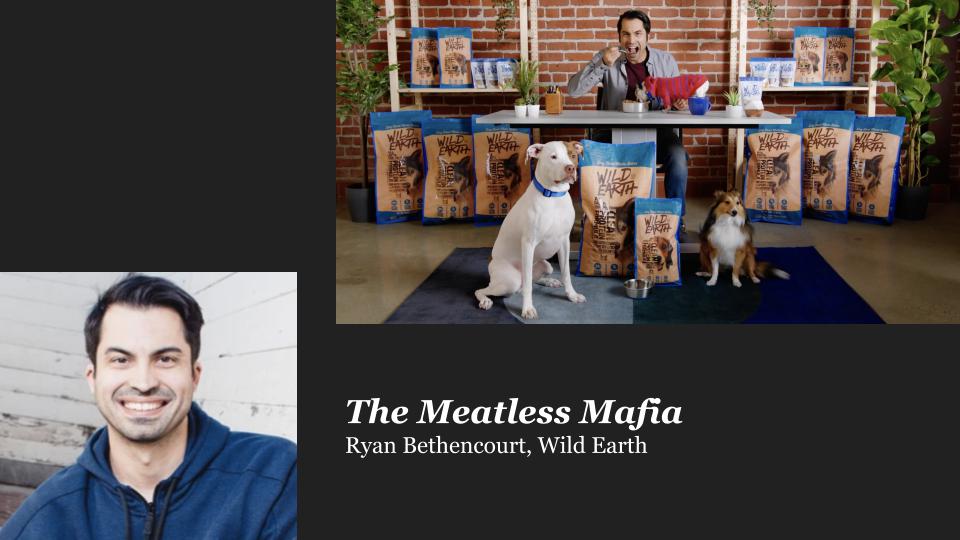 Wild Earth is a California-based biotechnology company led by founder and CEO Ryan Bethencourt, producing plant-based pet food and treats. The company’s mission was inspired by a UCLA study showing that the meat consumed by dogs and cats in America generates the equivalent of 64 million tons of carbon dioxide per year. That adds up to the same climate impact as a year’s worth of driving 13.6 million cars! The power ingredient in Wild Earth’s pet products is koji, a fungus traditionally used in Japan to ferment soybeans in making soy sauce. Koji has a tasty umami flavor and is high in protein (45%), making it a great substitute for meat. Wild Earth was featured on Shark Tank, where Bethencourt landed a deal with Mark Cuban. Since then, the company has secured a total of $12.2 million in funding from a series of investors. 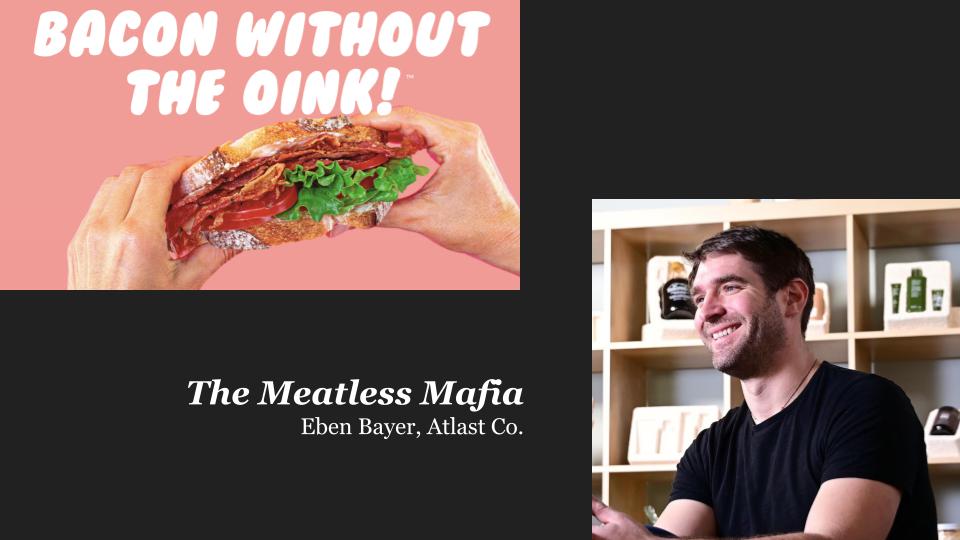 Atlast Food Co. is a New-York based food technology startup spun out of Ecovative Design ($30 million raised to date). Led by Eben Bayer, Atlast is a spinoff of Ecovative Design, which has a patented technology that uses mycelium—like the filamentous stem part of mushrooms—to create products as diverse as alternative meat products, biodegradable packaging materials, and animal-free leather. Atlast is developing structural ingredients for plant-based, whole-cut meat products. With mycelium fibers perfected over the last 10 years, Atlast can replicate the texture and mouthfeel of meat to a remarkable degree. By replacing conventional whole-cut meats, Atlast aims to significantly reduce the environmental impact of animal agriculture. The company launched its first product, a meatless bacon, earlier this year. 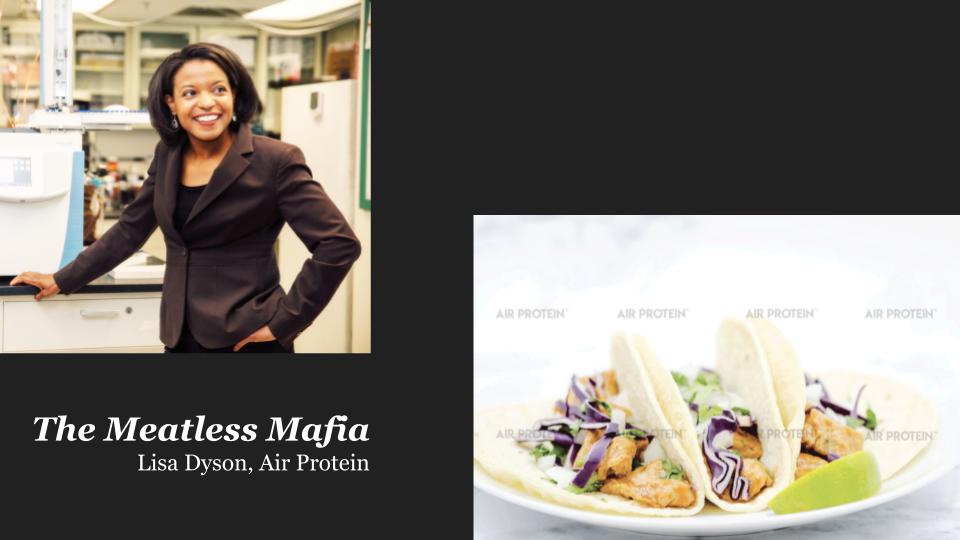 Air Protein, the California-based alternative protein initiative of Kiverdi, aims to revolutionize the meat industry with forgotten technology of the Space Age. Over 50 years ago, NASA came up with the idea to feed astronauts using a type of bacteria known as hydrogenotrophs. By metabolizing hydrogen, these single-cell organisms transform elements in the air—namely CO2—into nutritious protein. Now Lisa Dyson, CEO of Air Protein, is revamping this technology to create meat-free meat from very CO2 choking our planet. Like many sustainable protein companies, Air Protein’s process requires significantly less water and land than animal farming while its harvest is ready in a matter of days, rather than the months or years. The company has yet to announce its first offering but Dyson says its products will contain 80% protein and all the essential amino acids, minerals, and vitamins.

These companies are only a few examples of how science, technology and world-class entrepreneurs can come together to create disruptive food innovations that help fight climate change. Lab-grown meat, fungal protein, and plant-based foods are all part of the future of food. With the alternative protein market growing at a rapid clip, consumers can expect to see more companies offering healthy, sustainable, and delicious alternatives to traditional meat.

Want to hear more about how synthetic biology is reshaping the future of food? Join me for our special Food & Agriculture event!

Thank you to Stephanie Michelsen for additional research and reporting in this article. I’m the founder of SynBioBeta, and some of the companies that I write about, including Ecovative Design, are sponsors of the SynBioBeta conference and weekly digest.

GoogleMeet Google Drive – One place for all your files