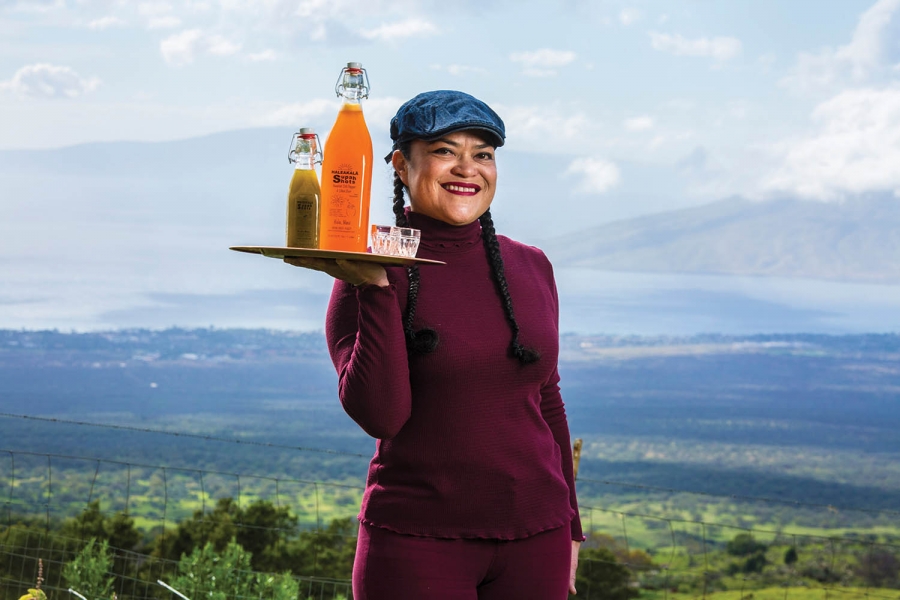 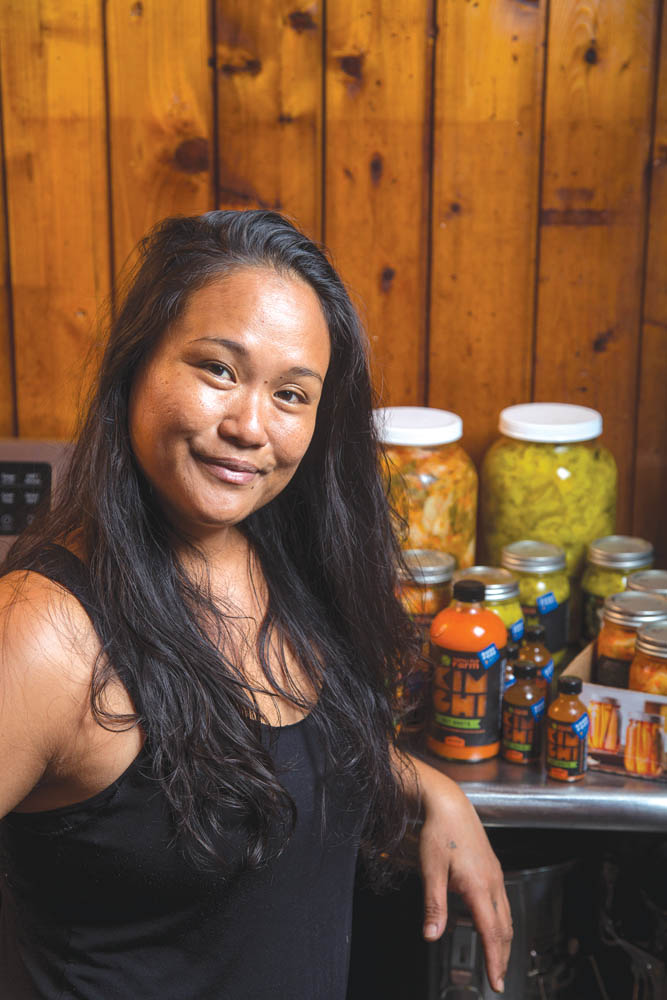 When Monica Bogar was a little girl, she’d sit cross-legged on the kitchen floor, her tiny chin and watch her mother and aunt make traditional Korean kimchi. As the two women quartered the cabbage, Monica would wait patiently for her cue. At last, her mother would nod, and she’d hop up from her spot on the floor, grab a bowl of Hawaiian sea salt, and carefully sprinkle it in between the layers of leaves. Nine years ago, Monica started making her own naturally fermented kimchi. Hers was a blend of her mother’s and aunt’s recipes with a few adjustments: She left out the MSG and swapped out fish sauce and fermented fish paste to make it vegan. The kimchi was a hit at Maui farmers’ markets, and Monica wanted to develop her fledgling business further. Who, she wondered, was out there to help her with that?

Elsewhere on Maui, Tina Keko‘olani was also crafting a product shaped by her upbringing. While still a teenager, she’d discovered a passion for food and nutrition when she’d nudged her family’s diet—which had consisted mostly of white bread, rice, and soda—in the direction of better nourishment. When she was older, Tina started making healthy hot sauces for her parents with two of their favorite ingredients: Hawaiian chili peppers and liliko‘i. In 2015, she concocted an immune-boosting elixir made with Hawaiian chili pepper water and fruit juice. To tone down the spiciness, she added vinegar, organic agave, and hand-harvested Hawaiian sea salt. She set up a booth at a community event near her home in Kula, and within a few hours, every bottle was gone. Word soon began to spread about Tina’s newly named Haleakala Supah Shots, and it wasn’t long before demand began to outpace supply. She’d come up with a proven winner, but how was she going to develop a professional network to grow the business? 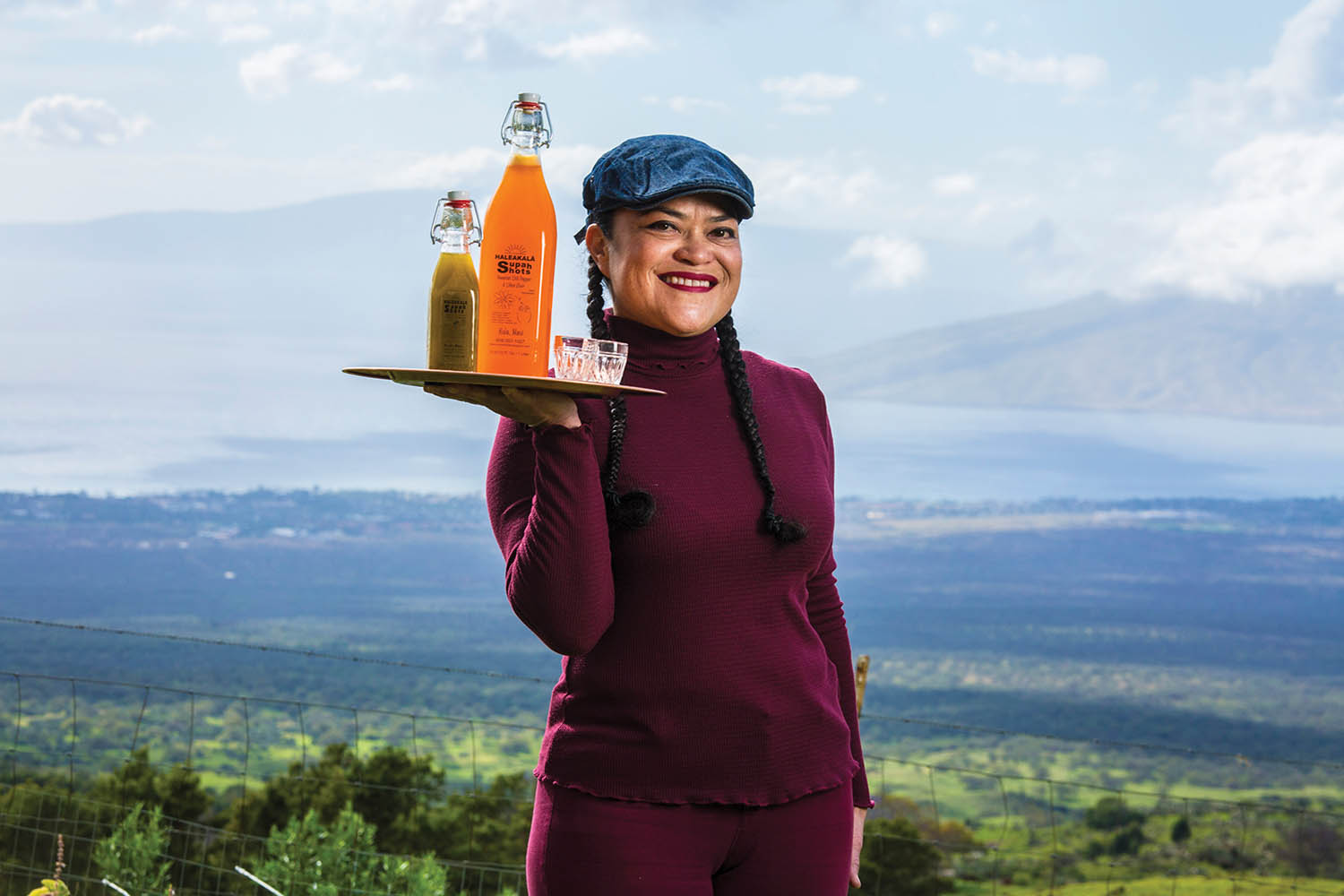 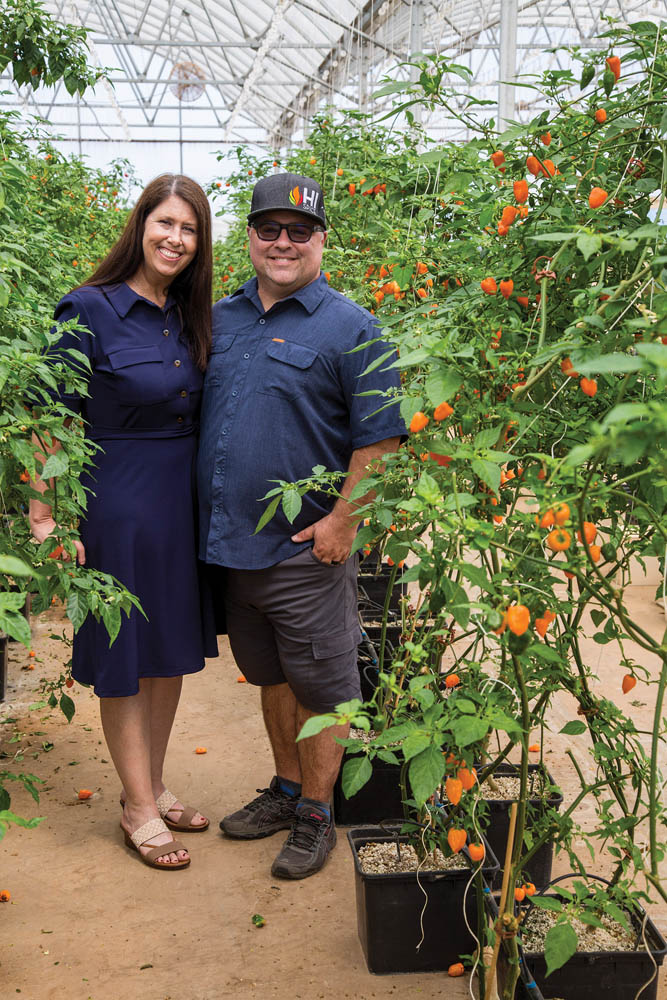 Seven years ago, Justin Orr also started experimenting with chili peppers. He was waiting tables at a restaurant in Kīhei when he noticed that a lot of his customers really liked hot sauce. There were chili peppers growing in his home garden—some sweet, others palate-scorching hot—so he decided to try his hand at making his own. After a bit of trial and error, he took a bottle for his coworkers and the restaurant’s patrons to sample. It was an instant hit. By 2016, Justin’s backyard was full of chili pepper plants, and he and his wife Katie were selling their spicy concoctions at farmers’ markets and the Made in Maui County Festival. That’s when they decided to turn their side hustle into a full-fledged business. But like Tina, they wondered just how to go about cultivating a professional network to expand the business.

And then there was Dawn Anderson. Eight years ago as she sat in an airport waiting to board a flight to Maui, Dawn unwrapped a sugar-laden energy bar for the last time. When she bit into it, she thought: “I can’t keep eating like this.” Well aware that her on-the-go life as a corporate travel consultant was taking a toll on her health, she started to stockpile whole foods—items like organic spirulina, cacao butter, and pumpkin and chia seeds—to make pre-flight smoothies. One day as she stood in her kitchen listening to the whirr of her blender, she thought: Why not pack the same ingredients into a ready-to-eat bar? After months of experimentation, Dawn created a refrigerated superfood bar. In 2014, at the urging of friends and family, she began selling the then-named bRAW bars at local farmers’ markets. The following year, she started selling them at Maui’s Whole Foods Market. But as the popularity of the bars grew, she found herself in need of someone to help her develop the business even further. 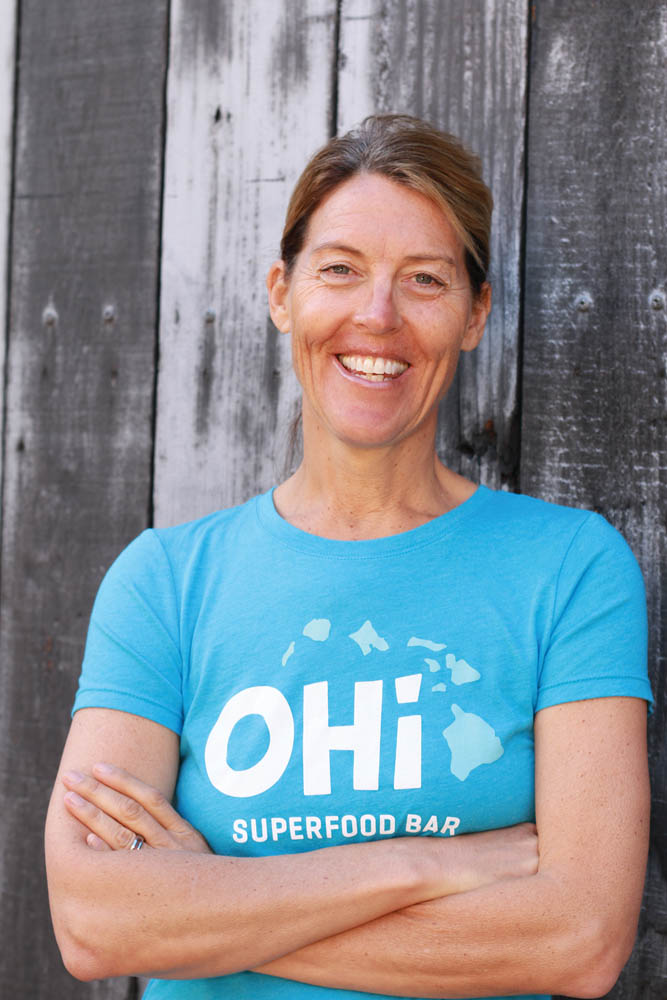 Four creative Maui residents, four unique food products, four sets of challenges—and the one thing that unites them all is the Maui Food Innovation Center, an incubator and accelerator that was launched four years ago at the University of Hawai‘i Maui College to help entrepreneurs jumpstart their businesses—and to help reduce Hawai‘i’s reliance on imported food. The first of its kind in the Islands, the Center is one of several university-based food entrepreneurship programs nationwide; it is funded by private donors and county, state, and federal agencies.

To date, 111 students have graduated from the Center. Eighty-eight of them—including Monica, Tina, Justin, and Dawn—are graduates of the Center’s flagship program, the eight-week-long Maui Food Industry X-celerator (MFIX) training program, which is designed for students who are ready to develop and grow a business. Every spring and fall, MFIX accepts twelve students who go on to learn the nuts and bolts of starting and running a food business—everything from securing financing to crafting a marketing plan to calculating packaging and shipping costs—along with food production, safety regulations, sourcing supplies, and other food business-related topics.

The weekly classes are led by the Center’s site coordinator and food specialist Chris Speere and by Greg Cabanting, a food marketing and distribution expert. There are also presentations from industry experts, including attorneys, investors, food scientists, and fellow entrepreneurs. At the eight-week mark, students pitch their products to a panel of judges, which awards three of them a cash prize; over the years, more than $100,000 has been awarded to MFIX students.

Dawn and Monica completed the program in 2016, Justin in 2017, and Tina in 2018. Each says the program filled in crucial blanks. Not only that: All four walked away with a cash prize. Today, they are thriving. Monica is a full-time organic farmer and the owner of Napili FLO Farm, which sells her kimchi to several Maui grocers and restaurants. Tina’s glas-sbottled raw vegan elixirs now come in three flavors—Kula strawberry, liliko‘i, and pineapple with Thai basil—and are sold in a number of stores and at community events. Justin’s company, HI Spice, sells its sauces—with flavors like jalapeno lime, turmeric ginger, and pineapple Habanero—to a growing roster of retail stores, restaurants, and resorts on Maui and to stores on Kaua‘i and O‘ahu and online. And then there’s Dawn. In 2018, she rebranded her bars—they became OHi Superfood Bars—and moved her company, OHi Food Co., to Torrance, California. She is now selling her superfood bars not only in Hawai‘i but on the West Coast and online.

“Any successful business would be lying if they said they did it alone,” Justin says. He, like Monica, Tina, and Dawn, attributes much of his success to the Maui Food Innovation Center. Dawn in particular says her expansion to the West Coast would likely not have happened if not for the program. “I honestly don’t know,” she says, “if I’d be where I am today without it.”

For more information about the Center and for program dates and fees, visit Maui.Hawaii.edu/FoodInnovation. In addition to MFIX, the Center offers free Food Akamai workshops for those who are thinking of starting a business; and the Concept to Consumer Incubator Program, which helps students turn a recipe idea into a viable food product. A fully equipped food manufacturing and packaging facility for all Center graduates is on track to open its doors on the Maui campus in 2021.