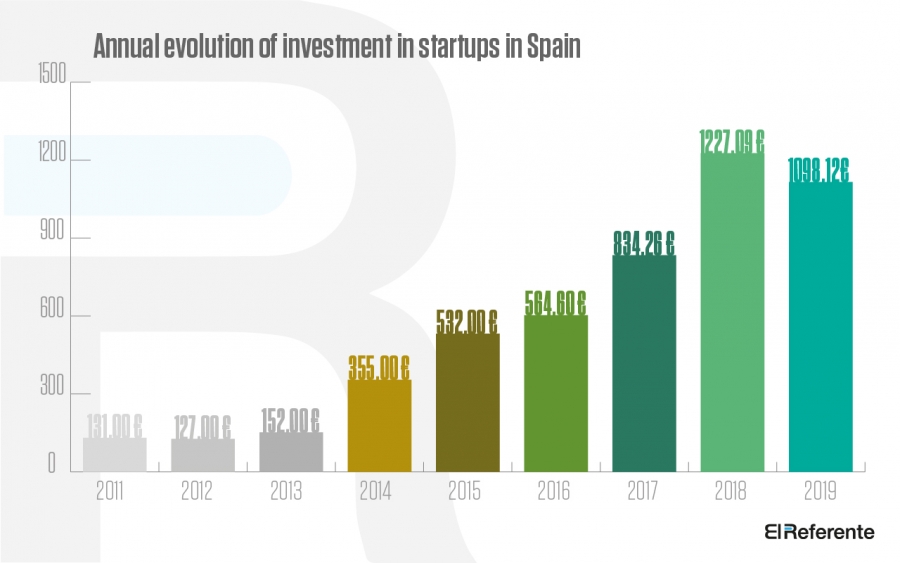 2019 closes with more than 1,000 million Euro invested in startups in Spain and with two Spanish technology companies, Cabify and Glovo, considered as unicorns (companies with valuations exceeding 1 billion Euro), whose latest operations have contributed to these accumulated figures. In fact, the last round of 150M Euro announced by Glovo last December means that investment in 2019 will reach €1,098.12M in a total of 205 public investment operations. 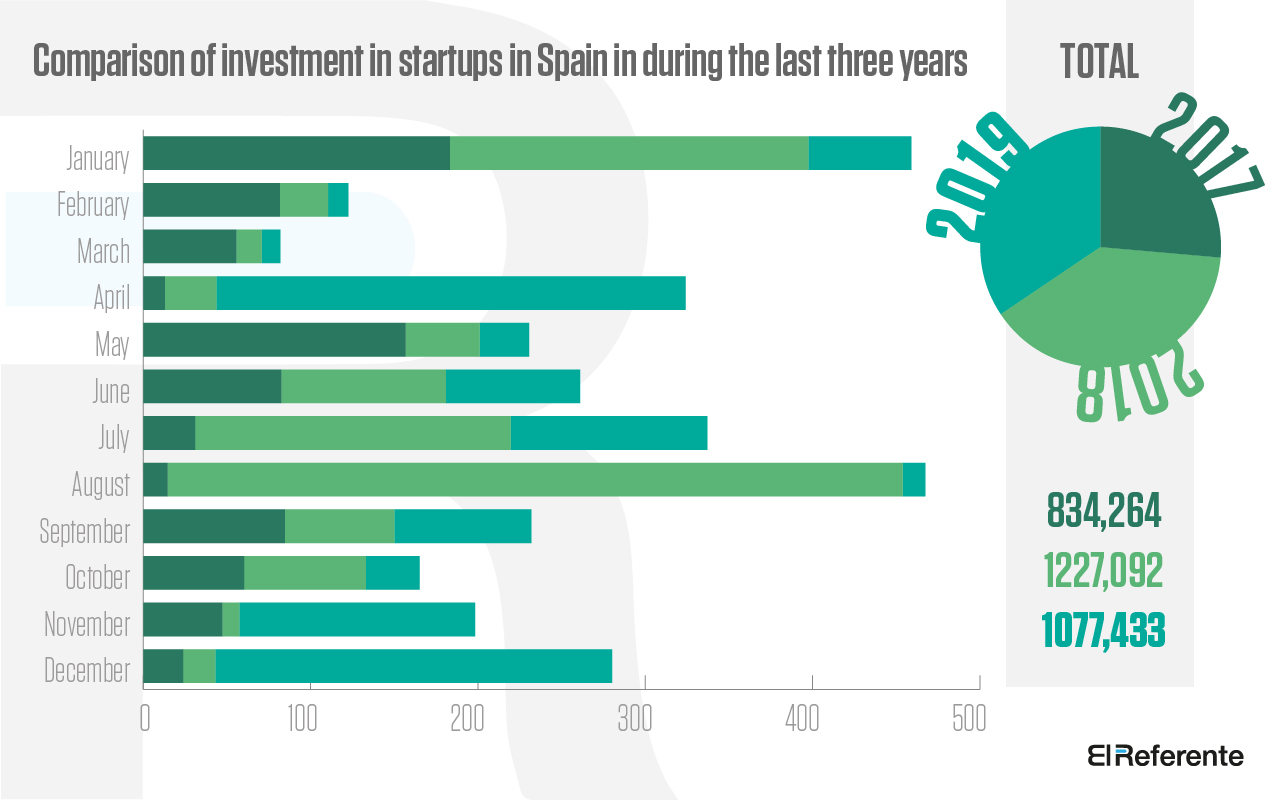 The figure is very positive as it is very close to the €1,227.09M obtained in Spain in 2018, which includes the Napsters round in Letgo (American subsidiary of Wallapop) of over 400M Euro. From the comparison of recent years, we can draw several significant conclusions:

Regarding the most relevant rounds, this year Glovo is the company that has raised most capital (€300M in two public operations–April and December–which given it a valuation of over 1 billion, making it the second Spanish unicorn). This represents almost 25% of accumulated Spanish investment, which remains in the hands of a single company, just like what happened last year with Letgo. 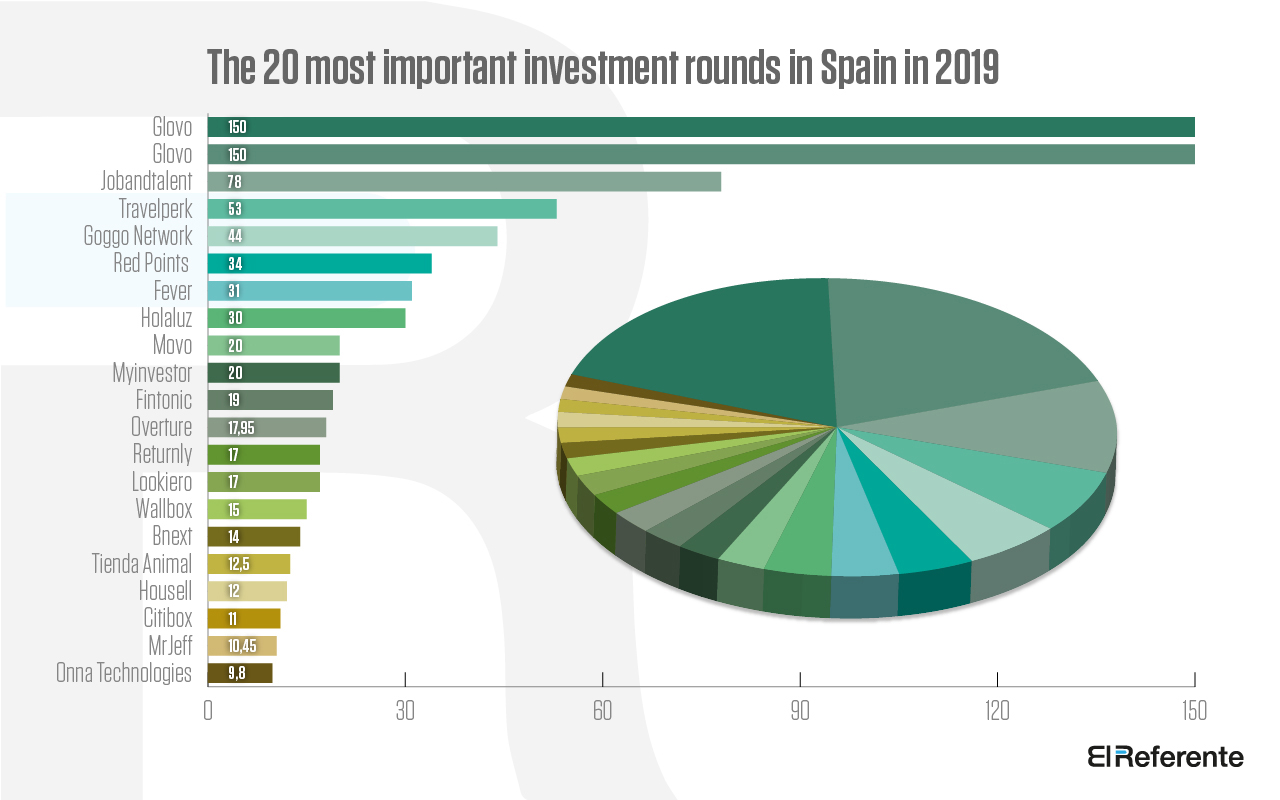 The Madrid startup Jobandtalent has also raised a round (78M Euro), the resources of which will go to continue growing in the United Kingdom, Germany, Colombia, Mexico, Sweden and France, markets in which they are already present in addition to opening in new locations. It also closed rounds in June 2018 (10M Euro) and in 2016 (38M Euro).

Other outstanding rounds of the year are those of Goggo Network (44M Euro), a self-driving vehicle transport company, founded by Martin Varsavsky and co-founded by Yasmine Fage with the aim of operating autonomous car fleets in Spain, France and Germany and the already known Travelperk, which closed a new round of 53M Euro after the two announced in 2018 (38.38M and 17M Euro respectively). 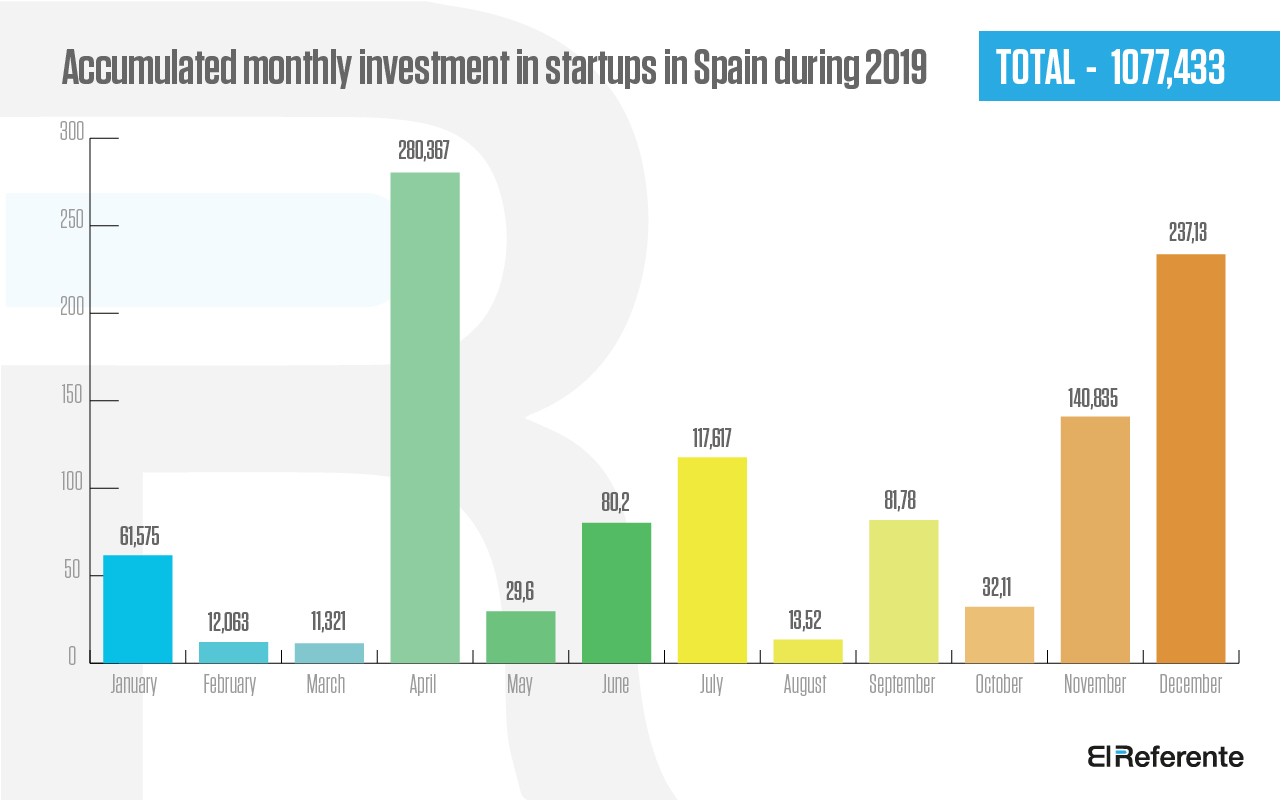 The figure reached in 2019 means that investment in startups has increased eightfold compared to 2011, when the accumulated figure was 131 million Euro. A very significant growth that has been increasing in all subsequent years… 2019 is the second year with the highest volume of investments in Spanish history (if we consider Letgo’s round as “Spanish”) and the second year in which it exceeds the 1,000 million barrier, which makes us quite optimistic for the coming years where startups continue to grow and there are still rounds in medium-advanced phases that allow us to continue dreaming that investment can continue to grow in 2020.

As for the months with the highest accumulated amount, they logically coincide with the two months in which Glovo announced each of its two 150M rounds: April, which closed with 280,367M Euro and December, which closed with 237,135M Euro. Another interesting month was November which closed with €140,835M thanks to Jobandtalent’s operation. On the contrary, the first months of the year were March (11.32M Euro) and August (13.52M Euro). A new batch of Spanish startups continues to grow with the aim of internationalizing their companies in the coming years, which is good news as investment will continue to grow, the startup sector will continue to generate employment and Spain will continue to take steps to be at the forefront of innovation in Europe as much as possible. There are strong companies that could become future Spanish unicorns in the coming years. This is the case of Spotahome, Travelperk, Goggo Network, Red Points, Fever, Holaluz, Fintonic or Returnly. Let’s continue with the positive trend of investment in Spain this coming year.

Access the complete report with all the Spanish public operations at this link.