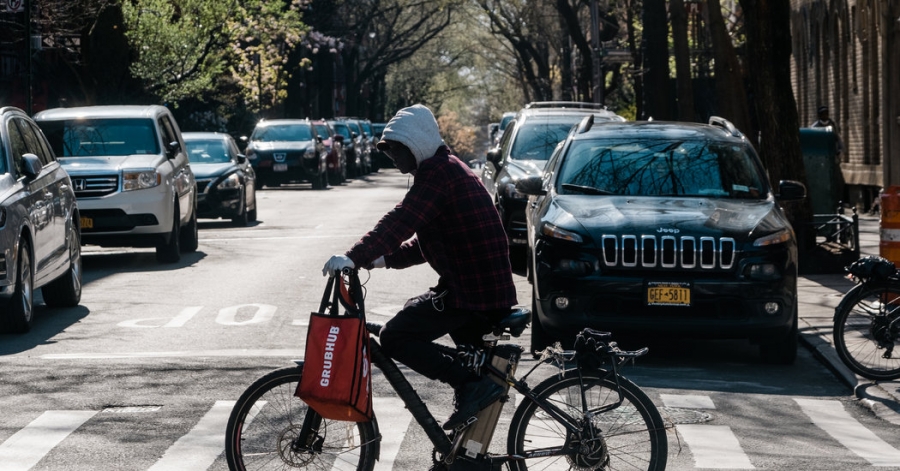 OAKLAND, Calif. — Just Eat Takeaway, a European food delivery service, said on Wednesday that it had agreed to buy Grubhub for $7.3 billion, a deal that would give it a foothold in the United States.

In the all-stock deal, Just Eat Takeaway said it would value Grubhub at $75.15 per share, a 27 percent premium to Grubhub’s closing price of $59.05. Grubhub’s founder and chief executive, Matt Maloney, will join Just Eat Takeaway’s board and oversee its business in North America, the companies said.

“I am excited that we can create the world’s largest food delivery business outside China,” Jitse Groen, the chief executive of Just Eat Takeaway, said in a statement. Mr. Maloney said the companies would place “extra value on volume at independent restaurants, driving profitable growth.”

Uber had been in talks to buy Grubhub, but those discussions foundered over price and regulatory concerns, said people with knowledge of the discussions, who were not authorized to speak publicly. If Uber had bought Grubhub and combined it with Uber Eats, the result would have been the largest food delivery service in the United States, with about a 55 percent market share. That had attracted antitrust scrutiny.

An Uber spokesman said the company would continue looking for deals in the food delivery business, but would not engage in “any deal, at any price, with any player.”

Food delivery has become more popular during the coronavirus pandemic. People have turned more toward services such as Grubhub, DoorDash and Uber Eats as restaurants shut down in-room dining during the early phases of the outbreak. Restaurants are slowly beginning to reopen.

Even so, profits in the food delivery business have been elusive. Uber Eats, DoorDash and Grubhub have all spent millions of dollars on marketing and incentives to lure customers away from the others. Grubhub, which had been profitable, began losing money as it spent more to fight off rivals.

“Competition and pricing pressure will be fierce going forward,” said Daniel Ives, managing director of equity research at Wedbush Securities. He estimated that Grubhub had a 24 percent share of the U.S. market.

The competition has led to deal making. In 2018 and 2019, there were 25 mergers and acquisitions in food delivery, valued at a combined $20.12 billion, according to Linklaters, a global law firm.

Food delivery services in the United States also face regulatory headwinds. In California, Uber and DoorDash are challenging a law that requires them to reclassify their independent contractors as full-time employees. And in several cities, lawmakers are considering caps on the fees that delivery services charge, which restaurant owners have said are exorbitant.

Just Eat Takeaway was created this year through the $7.8 billion combination of two of the earliest participants in Europe’s food-delivery market, Just Eat and Takeaway.com. It has been fighting competition in Europe from Uber Eats and Deliveroo, a London-based company whose investors include Amazon.

Mr. Groen, a Dutch entrepreneur, founded Takeaway.com in 2000 when he was a student frustrated with the challenge of ordering pizza online. He took Takeaway.com public in 2016, and now has a net worth of more than $1.5 billion, according to Forbes.

In addition to the deals for Grubhub and Just Eat, Mr. Groen bought the German portion of Delivery Hero’s business for about $1 billion in 2018.

Just Eat and Takeaway.com traditionally focused on providing software to restaurants so they could coordinate their own deliveries, a more profitable business model than supplying drivers to make the deliveries. But the combined company is building out its own fleet of drivers. This year, Just East announced a partnership to deliver food for McDonald’s in Britain and Ireland.

Senator Amy Klobuchar of Minnesota, the leading Democrat on a subcommittee on antitrust, said Wednesday that Uber had been right to back away from buying Grubhub.

“During this pandemic, when millions are out of work and many small businesses are struggling to stay afloat, our country does not need another merger that could squelch competition,” she said in a statement.