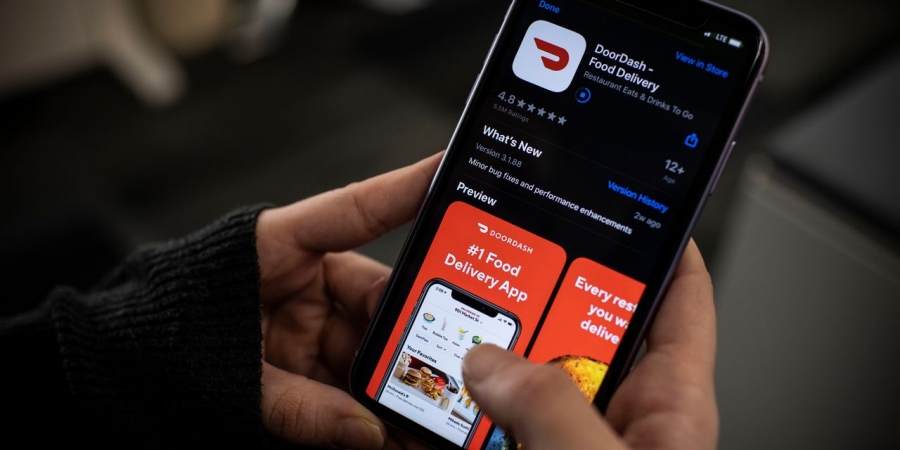 DoorDash Inc. is poised to seize a unique moment for its business with a long-awaited initial public offering.

The top app-based food-delivery platform in the U.S. said in its prospectus that it has raised $2.5 billion from investors including SoftBank’s Vision Fund since being founded in 2013. DoorDash DASH, , last valued at $16 billion according to Axios, now commands 50% of U.S. market share, according to Edison Trends, and also operates in Canada and Australia and has plans to expand elsewhere.

The San Francisco, Calif., company competes with Uber Technologies Inc.’s UBER, -1.68% Uber Eats offering and Postmates (which is being acquired by Uber) at 33% and GrubHub GRUB, +0.14% at 16%, Edison Trends reported. DoorDash notes in its prospectus that its market share in suburban markets, which traditionally have not developed delivery infrastructures like cities, is actually 58%.

DoorDash publicly filed for an IPO on Nov. 13, after announcing that it had started the process with the Securities and Exchange Commission in February, just before the spread of COVID-19 forced shelter-in-place orders that led to a dramatic increase in food delivery. In its first public filing with the SEC, DoorDash stated a target of raising $100 million , though that is typically a placeholder amount that will be updated in future filings.

The company intends to trade on the New York Stock Exchange under the ticker “DASH.” The listing will be led by Goldman Sachs and JPMorgan, two of 12 underwriters listed in the filing.

Here are five things to know about DoorDash from its SEC filing.

It got a pandemic boost, but …

The app-based platform, which partners with restaurants and depends on on-demand couriers to deliver takeout meals, said it was already seeing an increase in restaurant-food delivery in the past couple of years. The coronavirus pandemic sped that up, and DoorDash saw tremendous growth.

But like other delivery businesses, DoorDash is losing money. Although it turned a quarterly profit once this year, the company lost $149 million through the first nine months of this year, compared with a $534 million loss in the same period in 2019.

“Although we generated net income of $23 million for the three months ended June 30, 2020, we have incurred net losses in each year since our founding, we anticipate increasing expenses in the future, and we may not be able to maintain or increase profitability in the future,” the company stated.

See also: These are most popular pandemic food delivery orders by state

In addition, the pandemic poses risks to the company’s business. It has already had a devastating effect on many of the restaurant partners DoorDash needs — the National Restaurant Association said in September that 100,000 restaurants had closed down either temporarily or permanently since March — and could further weigh on the economy.

Among the other possible pandemic risk factors to the company’s business: possible travel restrictions and business closures, capital and financial market impact, regulatory actions and new outbreaks or information related to the virus.

The company, launched by three former Stanford students in Silicon Valley, will remain very much under the founders’ control after its IPO. That’s because DoorDash will have a dual-class stock structure that has largely become the norm for tech companies that have gone public since another company started by Stanford students embraced the structure when it IPO’d in 2004: Google GOOG, -1.23% GOOGL, -1.26%.

It is unclear from the first prospectus exactly how much of the company they will own after the IPO. But Xu — who will be able to vote the shares held by Fang and Tang — is set to join the club of ultra powerful founders who are hard to hold accountable, such as Google co-founders Larry Page and Sergey Brin, and Facebook Inc. FB, -1.18% CEO Mark Zuckerberg.

Xu included a founder’s letter in the filing and mentioned his journey as an immigrant who moved to to this country from China at age 5. He became a dishwasher at a restaurant where his mother was a server while she saved up to go back to school because her medical license was not recognized in this country.

“DoorDash exists today to empower those like my Mom who came here with a dream to make it on their own,” Xu wrote. “Fighting for the underdog is part of who I am and what we stand for as a company.”

However, DoorDash just spent $48.1 million to help pass Proposition 22 in California, which will exempt it and other gig companies from a state law that would’ve required them to treat their couriers and drivers as employees. The state initiative promises gig workers guaranteed wages and health care stipends for the first time, but their continued independent contractor status means they will not have access to sick pay, unemployment insurance and other worker protections to which employees are entitled.

For more: How the gig-economy business model will change with Prop. 22

The filing mentions DoorDash initiatives meant to help immigrant and refugee restaurant owners, but does not mention that there are many immigrants among the 1 million couriers who have delivered for DoorDash. Gig workers are largely nonwhite and immigrants, according to numerous studies and the gig companies themselves.

Despite the success of Prop. 22, DoorDash said it expects to continue to face challenges on the classification issue.

“Even with the passage of the 2020 California ballot initiative and similar legislation, such initiatives could still be challenged and subject to litigation,” the company said in its filing. “To the extent Dashers are determined to be employees under other state or federal law, we would be required to significantly alter our existing business model and operations, which would have an adverse impact on our business, financial condition, and results of operations.”

Despite DoorDash avoiding paying into unemployment insurance and other employee-related costs, the company will have increased expenses associated with fulfilling the promises of Prop. 22: minimum guaranteed earnings and health care subsidies for the couriers who work enough hours to qualify. If the company’s push to expand similar measures elsewhere is successful, it will face additional costs.

The company also faces other regulatory concerns, such as a law in California that will, starting Jan. 1, prohibit the company from delivering food from restaurants that it has not asked for permission.

In addition, DoorDash warned of weakness in its reporting and accounting controls, which is not entirely uncommon among companies seeking to go public. The audit of its 2018 and 2019 financial statements revealed the company did not have adequate processes and controls when it came to revenue to cash reconciliation, and it said it is trying to remedy that by hiring additional accounting, engineering and business intelligence personnel.

Then there’s competition. There’s a lot of it, and DoorDash’s most formidable rival, Uber, is bigger and has deeper pockets.

From 2019: DoorDash made a U-turn on tipping after uproar

Still, DoorDash may well protect its top spot in the space. Besides enabling deliveries of prepared restaurant food, DoorDash has also made a foray into delivery of other items with DashMart, a convenience-store concept it recently rolled out in eight cities. Its couriers pick up items ranging from local barbecue sauce to Advil to cleaning supplies from fulfillment centers run by DoorDash and deliver them to customers who pay a monthly membership fee.

With DashMart, DoorDash is competing with grocery-delivery app Instacart as well as Postmates (the delivery app that Uber is buying), plus Amazon.com Inc. AMZN, -0.56%, Walmart Inc. WMT, -1.23% and other retailers.

DoorDash also has partnerships galore, from being the official app of the NBA to working with retail chains such as 7-Eleven, CVS Health Corp. CVS, +0.50%, Walgreens Boots Alliance Inc. WBA, -0.84% and others. And it has rolled out a subscription service called DashPass.

The company’s position as market leader in the app-based delivery space seems secure, said Pete Flint, managing director of NFX Ventures in San Francisco, which does not have a direct investment in DoorDash.

“People have been gravitating to known brands,” he said, adding that it would be tough for other companies to replicate the “incredible flywheel” of customers, drivers, restaurants and partners that the company has amassed.

DoorDash is exploring long-term possibilities for delivery, including autonomous vehicles. It has a testing partnership with General Motors’ Cruise, and bought AV startup Scotty Labs for $5 million last year. It said it is also investing in research and development for drone delivery.

AV-enabled delivery would affect the need for DoorDash couriers, but it could be a while before it’s feasible.

“While we believe that autonomous and drone delivery could present substantial opportunities, the development of such technologies is expensive and time-consuming and may not be successful,” the company said in its filing.

For more: Uber says its drone delivery will cost the same as Uber Eats

That said, other startups are currently experimenting with AV delivery, and companies such as Amazon and Walmart are testing delivery by drones. Meanwhile, Uber is reportedly in talks to sell its self-driving unit to AV startup Aurora Innovation.