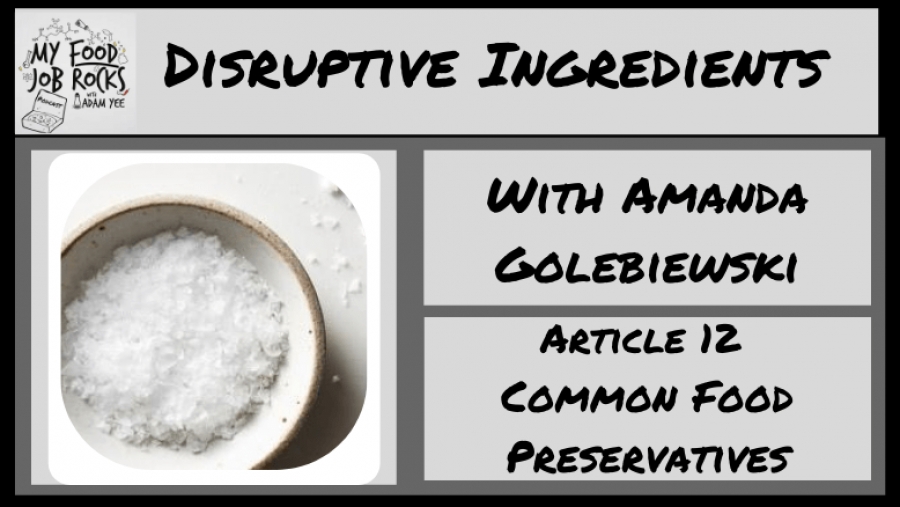 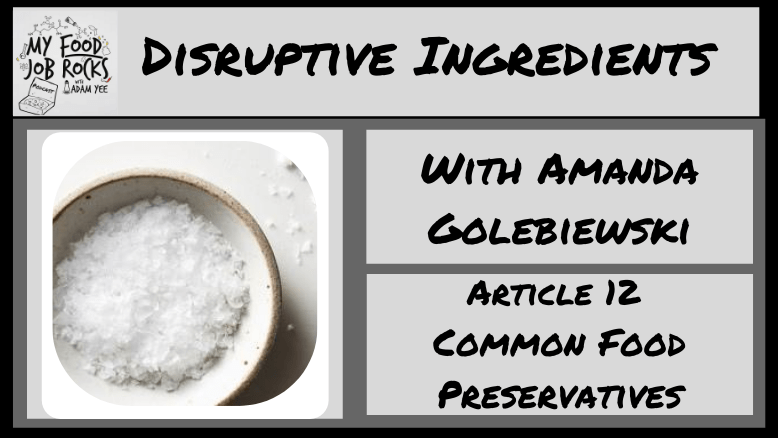 Thanks Amanda Golebiewski for writing this article about some of the food preservatives we use in the industry.

Food preservation goes hand in hand with the development of human civilization. Saving food was crucial to their survival. At that point, one small storm or drought had the potential to wipe out a whole village. Scientists and researchers have found that it all began with drying – dating back to 12,000 BC. Since then, humans have created a variety of preservation methods both simple and complex: fermentation, oil packing, pickling, salting, refrigeration, freezing, and synthetic/natural chemical solutions and substances. As stated above, food preservation was originally needed solely for safety, but now developed countries can use it for product consistency and quality as well.

As our population grows, food security is becoming more and more vital. Food waste must be avoided at all costs – especially in underdeveloped countries. One way to help minimize the amount of food waste is through the addition of preservatives. They can increase a product’s shelf life from three months to one year! Chemical preservatives have been in our food since the 19th century. Their main function is to inhibit microbial growth by making the food an unlivable environment – some are able to help maintain the product’s quality. Most chemical preservatives are acids of some kind as most spoilage microbes thrive in a neutral pH environment. Other chemical preservatives are antioxidants. These can hinder oxidative rancidity which naturally occurs over time and can cause off flavors and color bleaching.

In the US, The Food and Drug Administration (FDA) regulates food preservatives. It has created strict legal limits based on multiple factors: type of food product, storage conditions, and more. Food preservatives are constantly being tested to ensure their safety. Health reviews, scientific studies, and additional extensive evidence is needed in order for a new preservative to hit the market. The FDA has created a safe legal limit and recommended maximum daily intake for all accepted preservatives with a large safety margin. Overall, preservatives that are currently in our food system are generally considered as safe (GRAS) in moderation. Fear of preservatives have occurred when scientists have published studies supporting their harm but there is not enough evidence to fully make any adverse claims or statements.

There are many different chemical preservatives but this article will focus on those that I have worked with in the past as well as those that are most commonly present in everyday food products.

Potassium sorbate is an odorless, off white salt made from sorbic acid and potassium hydroxide. It is typically pelletized and is water soluble making it a very easy to use in food. This preservative is a workhorse that I have been able to use in a large number of products. It doesn’t change any of the food product’s properties at low doses but can still inhibit growth of yeast, mold, and fungi. Some people have claimed to have an allergic reaction to it but it is still considered GRAS by the FDA because it is very rare and will not accumulate in the body.

Sodium benzoate is another preservative that I have used at work. It is the first chemical preservative to be approved by the FDA. It is an odorless, off white salt that will be excreted from the body within 24 hours too. Sodium benzoate is made by combining benzoic acid and sodium hydroxide. It is not as water soluble as potassium sorbate but it will eventually dissolve with some more mixing. It is another yeast, mold, and fungi inhibitor. Sodium benzoate is best used in more acidic foods such as sodas. Some studies have found that sodium benzoate may convert to benzene, a known carcinogen, over time with exposure to vitamin C. However, there is not enough evidence to reject sodium benzoate. The FDA has concluded that low levels of benzene does not pose a health risk but foods containing both sodium benzoate and vitamin C should be consumed in moderation.

Nitrates and nitrites are two other preservatives that have a bad rap. It can be found in processed meats, and aids in color retention and shelf life extension. The issue with nitrates and nitrites is that they can create nitrosamines, carcinogenic chemicals, with high heat. Scientists have found that adding vitamin C to the food product can help reduce the nitrosamine content. However, there has not been enough studies that connect consumption of processed meats containing nitrates/nitrites with cancer. So, it is wise to consume in moderation.

EDTA, tocopherols, and vitamin C are three kinds of antioxidants. This means that these substances help protect the food from oxidation which negatively affects the product’s color and taste. EDTA is short for ethylenediaminetetraacetic acid and is considered GRAS by the FDA. Tocopherols are vitamin E. They help prevent browning and are mainly used in high fat food products. Vitamin C or ascorbic acid is another antioxidant that helps retard spoilage and rancidity. It is a natural antioxidant found in many fruits and vegetables.

Most chemical preservatives are acids: sorbic, benzoic, citric, etc. All of these acids are considered GRAS by the FDA. They help stop microbial spoilage because they make the food product an unideal environment for microbes to grow. They can be found naturally in some fruits, vegetables, and spices but when adding to food, it is much cheaper to buy the synthetic version. There has not been conclusive evidence that any of these acids pose a health risk to an average, healthy consumer.

The final preservative type is sulfites. Sulfites are frequently used in the wine and beer world. On an ingredient declaration, sulfites have many names: sulfur dioxide, sodium sulfite, sodium bisulfite, potassium bisulfite, sodium metabisulfite, and potassium metabisulfite. They are antimicrobials as well as browning inhibitors. They are GRAS but it has been found that some people may be sensitive and have asthma-like symptoms – about 1% according to the Cleveland Clinic.

Food preservation is becoming more important now more than ever with our growing population. Although there have been some studies showing negative effects of chemical preservatives it is still safer to eat a food containing something that has been vigorously studied by the FDA versus eating something that may be infected by microbes. Chemical preservatives help fight against foodborne diseases as well as spoilage. They allow people to have options no matter what season it is. It is best to eat them in moderation but don’t be afraid of them!