Beyond Meat founder: Our plant-based meat is on its way to being cheaper than animal protein 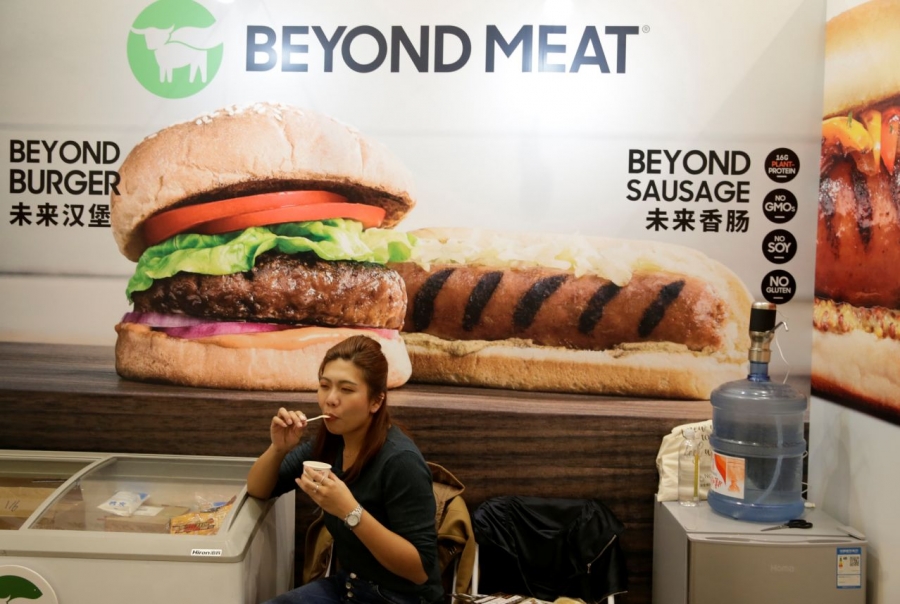 One thing is abundantly clear when this writer caught up via phone with Beyond Meat (BYND) founder and CEO Ethan Brown this past Friday night: He has a lot cooking on his grille this summer.

Some Peloton rides through the majestic streets of Italy (hey, not everyone takes Peloton’s live classes). Taking his daughter to kickboxing classes. And you know, the not so small task of being the driving force behind a relatively young plant-based meat juggernaut that is closing in on a $10 billion market cap just over a year since its IPO.

On any given day Brown’s responsibilities include: (1) scouting out terrain to build new manufacturing capacity; (2) signing fresh distribution deals with fast-food companies; (3) giving the green light on products like the new spicy BBQ cheeseburger at Carl’s Jr. using the Beyond Meat patty; (4) thinking of ways to lower the price of the company’s meat (he has done that this summer via new value packs at Target and Walmart; and (5) refuting misguided stories on his company’s relationship with McDonald’s (Brown continues to view working with McDonald’s as very important and Beyond’s relationship with the Golden Arches is just fine and dandy after a recent product trial in Canada ended as planned).

Maybe he even manages to check the stock price once or twice a week on the Yahoo Finance app (the stock is up 90% year-to-date, in case you are wondering). Brown won’t say that he does, at least to me — so we are just assuming.

And oh, all of this — perhaps collectively happening daily in some form or another — is going down during a major global health pandemic in COVID-19.

Yahoo Finance talked at length with Brown about the road that lays ahead for Beyond Meat this year. What follows is an edited and condensed version of our chat.

Beyond Meat founder and CEO Ethan Brown has growth on his mind. Photo by Tom Cooper/Getty Images for Wellness Your Way Festival)

Brian Sozzi: You told me back in May about some new value packs you were debuting. They are now in stores. I know lowering the price of your meat to drive accessibility and more volume is important to you. What has the response been like?

Ethan Brown: We set this goal 18 months ago that in five years we would be able to underprice animal protein in certain categories, and we feel that we’re well on our way to doing that. This summer, as COVID-19 led to some disruption in the animal protein markets we felt that we had an opportunity to hold our breath, lean in and adjust our pricing so that it was much closer to that of traditional meat patties. And so with the value pack we are basically $15.99 now for 10 burgers. Some are offering it in some grocery stores at $14.99. So, we are within the price for beef. It keeps changing, but we are within the price of roughly 20% of the beef patties in the supermarket today.

Obviously we are signaling that you can get really close to parity with beef. Once we start to hit scale, you’ll see the direct material and direct labor benefits of that as we push more volume through our facilities and are able to integrate much more production. But there’s no material obstacle to us being able to, over the long run, under-price animal protein, we just need to keep working on it.

Sozzi: You actually think you can make your meat cheaper than traditional meat?

Brown: Absolutely. We have to get back to the basic idea of water through an animal. We’re taking the core parts of meat. Those five names — and we talked about it a lot — you know acids, trace minerals, vitamins and water are taken directly from the plant — and we’re organizing community architecture. So we’re skipping all of that. And we’re going right to the production of meat right on the plant. And so the reason we’re not less expensive today and the reason we’re quite a bit more expensive is as simple as scale.

Sozzi: How are you more aggressively ramping up production?

Brown: We are right now, so the opening of the facility in Europe is an example of that. We’re going to be making some additional investments that we mentioned in China. We’re going to make investments by the end of the year in production infrastructure. So into 2021 and 2022, you’ll see us start to hit higher volumes, which will give us the opportunity to look more aggressively at pricing. That’s actually critical, we have to deliver what we call the trinity of benefits — or trending value — of continuing to close the gap between our product and regular protein.

Second, we want to keep increasing the nutritional benefits of our products in terms of delivering all the good stuff to keep track of protein and iron, but taking out the bad stuff that we don’t want. And then lastly, when we get to below animal protein that is a very unusual proposition. The consumer says you know it tastes just like beef, but it is better for me nutritionally and it’s cheaper. How am I not going to eat it. We think that once we hit those three coins on the head, the majority of consumers will come on board.

Sozzi: What have you learned about the nation’s food supply during the COVID-19 pandemic?

Brown: Really two things. The first thing was consumers are starting to get insight into how their food is being made. You turn on the nightly news or you clicked on a story about the spread of COVID-19 at processing facilities. You also were now looking at how those facilities are run, and they’re not a pleasant place, right? They’re not like anyone would say they are. And so consumers started to see the dismemberment, crowded conditions and things of that nature. And so it certainly provided a glimpse to the general public of the process through which today’s food is delivered to the plate.

And that’s what we juxtapose with our process, which is one where the protein comes right from the plants and is run through a system of heating, cooling and pressure to complete.

The second thing I think was really evident to me was this, not by any foresight or spectacular planning, is we just didn’t have the same level of risk in our facilities because we don’t have such crowded assembly lines. Our process is one that is much lower touch because we are not separating pieces of meat. So we’re able to produce with much more spatial advantage and do it with fewer people. So, I think that was really eye-opening.

Brown continues to be laser-focused on lowering the prices for Beyond Meat’s products. (Photo by Smith Collection/Gado/Getty Images)

Sozzi: It sounds like this is your moment, so to speak.

Brown: It absolutely is. We have to react to this for consumers.

Sozzi: I think the novelty around plant-based meat has come and gone. So how are you still winning these large fast-food deals from executives?

Brown: I think, first of all, it’s really great to see a new guard that is leaning into the notion that consumers are after great tasting, affordable protein. We can create a chicken like experience for the consumer, and we can create a burger experience with consumers. And it’s simply being made out of plants, not an animal. That’s something to watch and they’re reacting to that. They’re particularly reacting to the fact that the younger consumers are demanding these products. And so I think they are being very smart and they’re seeing where the consumers are going, and they’re looking to meet them there.

Sozzi: You mentioned earlier investments in China. Like what?

Brown: We have been investing in personnel and infrastructure. I’m super excited about some of the people that we’ve been able to attract to the business. Micky Pant [former Yum! China CEO] is a senior advisor. So he has been helping us to open and sign up and understand the culture. So that’s some of the work on the personal side. On the production side, we’re opening our first facility by the end of the year.

Sozzi: What has it been like operating a growth company during a pandemic?

Brown: I think the thing that’s the most frustrating is the rate at which some of the partnerships on the food service side are able to roll out. We have that entrepreneurial way, or that growth company way. We just get things done. But you can’t do that in a pandemic environment because there are risks when you do that. So that has been the hardest lesson for us, and we had to shut down our research center, and we had to go into these shifts with very small numbers of people working. We had to be very patient with our quick-service restaurant partners and still are today. Launches and product rollouts have been delayed. That’s been the toughest part for sure.

Sozzi: It surprises me there are still so many skeptics on Beyond Meat out there. I mean, 10% of the stock is shorted. Talk to those skeptics for a second — who is Ethan Brown?

Brown: Somebody who has been really fortunate to work on an idea whose time has come in the sense that this is something the world needs. And, for whatever reason, I happened to start working on it a long time ago and surrounded myself with the right people and made some good decisions along the way that allowed me to be part of a broader movement that we feel so passionately about.

You know we get up and go to work and it’s not about money. It’s about this opportunity to be part of a group of people separate that cares about human health and the climate. So there’s an ethos to our brand, which carries us pretty far.

Brian Sozzi is an editor-at-large and co-anchor of The First Trade at Yahoo Finance. Follow Sozzi on Twitter @BrianSozzi and on LinkedIn.