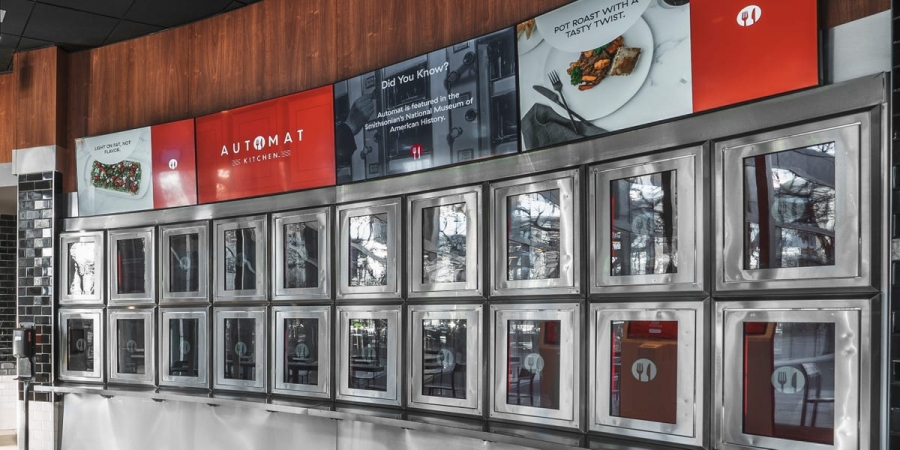 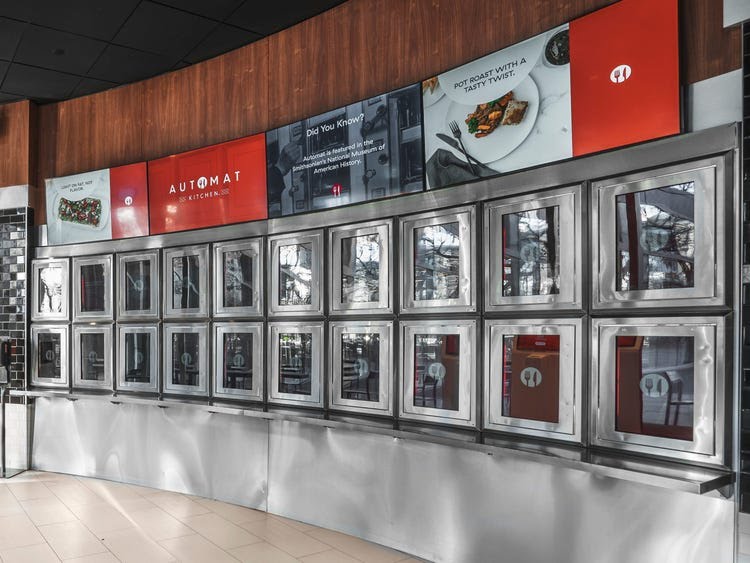 It looks futuristic – but it’s actually based on a restaurant phenomenon that boomed during the 1950s before dying out in the US.

New Jersey restaurant Automat Kitchen is trying to revive the automat with modern technology and high-quality food. And in the midst of a pandemic, when diners are urged to avoid unnecessary contact, the timing could hardly be better.

Automats are like self-service vending machines where customers insert coins or use their card to buy hot food. They have a notable presence in countries including Spain, the Netherlands, and Japan, but Horn and Hardart, which dominated the US automat industry, closed the doors of its last New York City site in 1991.

A Horn & Hardart’s Restaurant at 42nd Street and Third Avenue, New York City, early November 1965. Because of a blackout that hit most of the northeast, crowds jammed the restaurants and ate up almost everything in sight. Bettmann/Getty Images

The pandemic may give the machines another lease of life.

While automats typically sell pre-made food, Automat Kitchen, which opened in Jersey City earlier this year, makes all its food to order. Chefs in the kitchen then place the meals in one of the restaurant’s 20 lockers by opening them from the back.

Customers can order in advance via Automat Kitchen’s website or on its app. They can also order on-site by scanning a QR code.

You can order in advance or on-site. Automat Kitchen

They are then texted a code when their order is ready, which they enter into the locker to open it. Alternatively, customers can also reply to the text message with the word «open» to open the locker – making it an entirely touch-free experience.

Screens above the lockers show the order status, and when it’s ready the locker lights up.

The screen above the lockers tell you whether your order is ready. Automat Kitchen

Customers get their receipt automatically emailed to them after the transaction. Customers can also choose to pay by cash, but most use their phones to get the full experience.

Automat Kitchen has patents that cover any computer-controlled, food locker technology, which permits a customer to open a food locker by using a device such as a cell phone to retrieve their food, without ever needing to touch the «locker.» Those patents cover the technology that is being adopted by several food-delivery system manufacturers, it told Insider.

Chefs make the meals to order and place them in the lockers from the kitchen. Automat Kitchen

The restaurant also offers delivery via DoorDash. Though delivery drivers do not currently collect the orders from lockers, the restaurants’ owners say they’re working with DoorDash to integrate orders into the locker system.

Automat Kitchen’s principal owner, Joe Scutellaro, has been working on the restaurant for over a decade, well before the pandemic revived momentum for contactless collection.

Both the restaurant’s interior and menu include tributes to the automat phenomenon of the 1950s. GTL Construction Scutellaro said he has fond memories of visiting the New York City automats as a child in the 1960s, and wanted to recreate this with an updated look, experience, and menu.

The restaurant’s menu has hot and cold beverages, salads, and sandwiches, alongside more substantial meals.

It features what it bills as «creative global twists on American classics,» including a massaman curry pot roast, frito pie burrito, and cinnamon beignets.

It also serves a $15 chicken dinner, which includes half a rotisserie chicken, as well as a chicken pot pie, which it calls «an automat classic remade.»

You can even get half a rotisserie chicken from the lockers, served with black beans, brown rice, and spicy sofrito sauce. Lily Brown MST Creative PR

Automats boomed, then dived, in the US

The world’s first automat was opened in Berlin in 1895. Horn and Hardart opened the US’ first automat in Philadelphia 1902 and went on to dominate the industry in the US: By the 1950s, the company operated almost 50 automats in Philadelphia and more than 100 in New York. Automats were particularly popular among white-collar workers because of their speed.

The popularity of automats has since dwindled in the US, and Horn and Hardart’s last NYC site closed in 1991. As software and hardware progressed, San Francisco chain Eatsa developed a chain of more high-tech alternatives, but it closed its doors in July 2019, too.

The pandemic, however, is giving automats a new lease of life. Some companies are trying to innovate beyond the traditional automat models, and «the time certainly seems right,» according to Tim Sanford, editor of trade publication Vending Times.

Alongside Automat Kitchen, the Brooklyn Dumpling Shop is rolling out new-look automats, too. Its 24-hour locations, set to open in the spring, will let customers control their orders using their phone. The sites will range in size from 500 square feet to 1,000 square feet, and the lockers light up in blue for chilled items, and red for hot to-go orders.