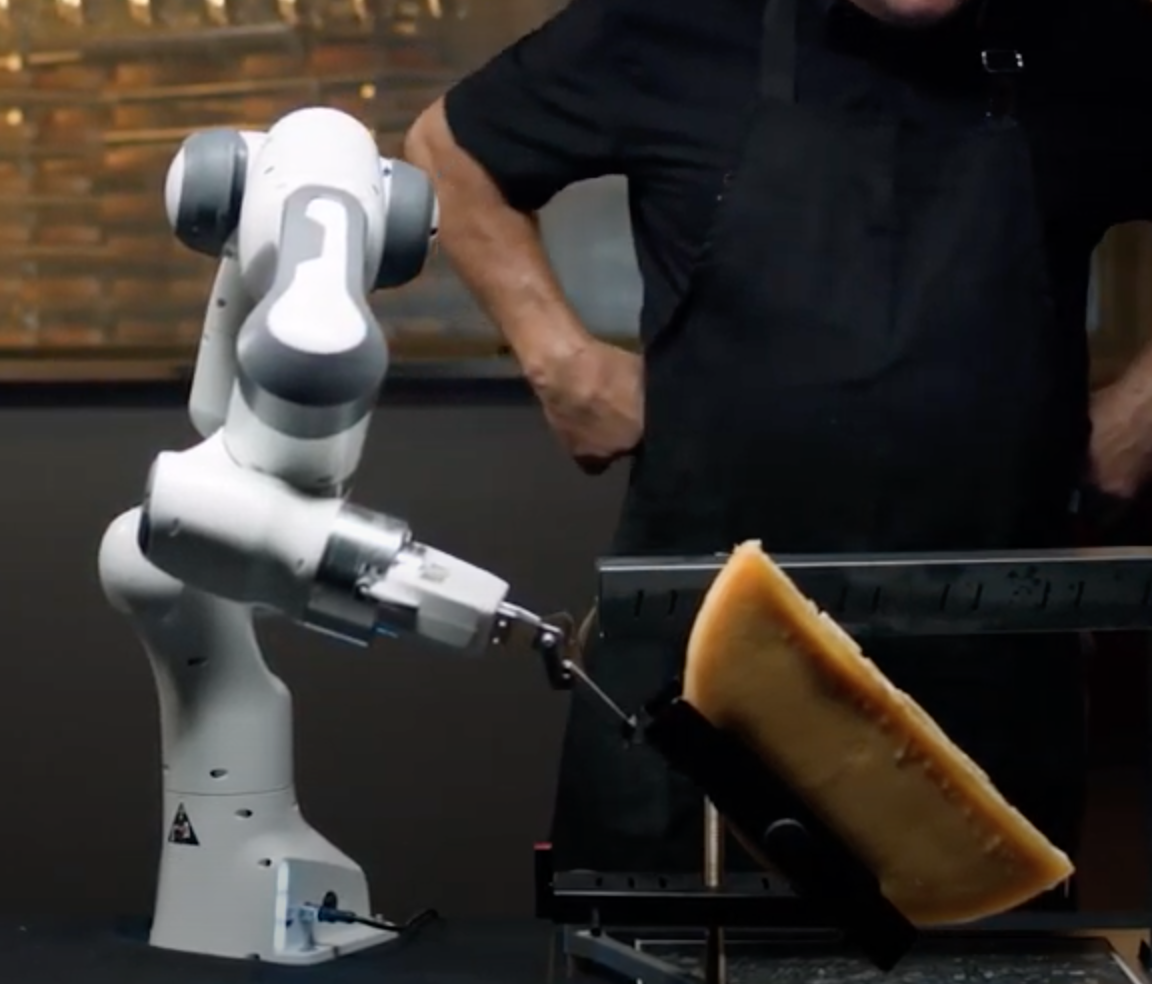 One of the robo-stars of this year’s Consumer Electronics Show in Las Vegas was a slightly wacky invention from Switzerland: a robot that has been trained to heat up a wheel of raclette cheese, then slice off the molten parts.

Getting this robot up to standard required the savoir-faire of the Swiss cheese expert Eddy Baillifard, who took the robot in hand and guided it through the process. Giving the robot its flexible dexterity, its cognitive ability to learn the right gliding and cutting movements — including its awareness of how to keep cutting away at the molten bits and not the harder bits yet to melt — were roboticists from the Idiap Research Insititute in the Swiss town of Martigny. Their creation is the first robot to learn how to cut and serve raclette. Aside from the technical feat, the project shows the potential of robots learning from demonstration techniques, and it offers a glimpse of better human-robot collaboration. In the final moment of a video from Idiap, Baillifard and his robotic students clink glasses in triumph.

Looking closely at the video, and various other clips of footage on social media feeds from those present in Vegas, it is easy to appreciate the fine art of raclette cutting. A traditional cheese cutter’s hand has to move quickly and smoothly: they apply precisely-controlled pressure on the melting cheese surface to let it land on the plate. (This reporter has tried this out before, and while a fairly satisfying activity, it is all too easy to slip and hack away at the wrong bits, to the embarrassed looks of friends and family members hungry and eager to ooze that salty Swiss cheese over their potatoes.)

“Depending on the type of raclette cheese, the surface can vary in terms of softness and can be more or less fluid,” says the cheese maestro Baillifard, in a press release sent to AFN.

Emmanuel Pignat, a PhD from the Idiap’s robotic group, teamed up with Eddy to guide the robot’s arm so it could record the movements and forces needed to perform the task. This learning technique allows transferring skills from the human to the robot in an intuitive manner.

The range of applications is wide, the team says; these applications include industrial robots, service robots, and assistive robots. The press release notes how it can “relieve professionals of their most repetitive, dangerous or uncomfortable duties, in order to spend more time using their human skills, such as supervision, evaluation or decision making.”

Learning from demonstration – the scientific term for copying a gesture – seems an obvious task to us humans. But that is still much harder for robots. They are usually programmed for a specific task, which is repeated accurately in a loop. “Thanks to artificial intelligence algorithms, the robotic arm can generate movements that can adapt to new situations. In this specific case, the cheese can be in slightly different positions and orientations, and there can be more or less cheese left in the oven,” says Sylvain Calinon, head of Idiap’s Robot learning & interaction group, in a statement. “This ability to adapt is the key to allow efficient human-robot collaboration. The cheese Master shows each time a slightly different way to scrape the raclette cheese onto the plate. The underlying learning algorithms allow the robot to integrate these nuances to recreate a meaningful gesture in a new situation.” More details on the process are available in this scientific publication.

LG showcased its smart restaurant called ThinkQ CLOi’s table; but much of it does not seem too practical as yet. See the video here, where even in the demo, the chief chef should have brought the client the food himself; the ability to make many batches of pour over coffee is a good spectacle and a sign of the state of the art in the robo-coffee industry as a whole, which I’ve reported on here.

Samsung, meanwhile, brought its “Bot Chef” to CES, which seems to have slightly shaky dexterity as it nervously pours olive oil or swerves to and fro with a kitchen knife.

I’ll have a bit more to write about this in the coming weeks and months; but in the meantime, any reviews or insights about these smart kitchens would be most welcome. Email me at richard@agfunder.com